A good father is one of the most unsung yet one of the most valuable assets in our society. Every father tries to leave a lasting mark on his children. Legacy isn't confined to a will or an inheritance, it is what a father gives them in terms of support, wisdom, character, and faith. And when it comes to handing over business, every father nurtures his children with his best knowledge and acumen.

Bhilwara province, Rajasthan, India, has witnessed three such prime examples of highly successful fathers passing on their trade secrets to their sons. Nitin Spinners, Sudiva Spinners and Lagnam Spintex, all highly renowned spinning mills were formed by fathers and are now looked after by their sons. In all three ventures, one thing which is common is - brand Truetzschler. Visionary leader and Chairman R. L. Nolkha is a professional with an experience of five decades and worked with prominent groups like BSL and RSWM. He was also the CEO of LNJ Bhilwara group for more than two decades. He founded Nitin Spinners in 1992 as a launch pad for Dinesh Nolkha, who had just completed his Chartered Accountancy. Starting with a humble beginning of two open ends, today Nitin Spinners stands tall with an enormous capacity of 3 lakh ring spindles, 3500 rotors, 63 knitting machines, 168 air-jet looms with 200 tonnes per day production of 5s to 80s yarn counts. In 2002, the second son Nitin Nolkha who is a Management Graduate also joined the board as an Executive Director. With more than 19 Years of Industrial experience, Nitin Nolkha looks after procurement of materials and implementation of projects.

R.L. Nolkha happily remarked that "We are high quality manufacturer of yarn and do not believe in compromising quality on any parameter". We needed "the best possible technology partner and Truetzschler perfectly fitted the bill." The relationship which started in 1997 with the purchase of DK 740 cards continues with TC 10 cards in our latest project. At present Nitin Spinners have 142 Truetzschler cards in all their units. Dinesh Nolkha said that "Since Truetzschler is the preferred supplier for many reputed spinning mills, they should further enhance their core strength and continue to excel in their product domain and offer end to end solutions in Sliver Preparation".

Nitin Spinners which recently forayed into Blends opted for the T blend from Truetzschler. Dinesh Nolkha praised the Blending technology of Truetzschler. He said "It gives us more flexibility to produce different blends with the highest precision and lowest CV%." By combining a sharp focus on sustainable profitability with innovative products, the father-son trio have created a name for Nitin Spinners in more than 60 countries covering five continents where their yarn is exported. 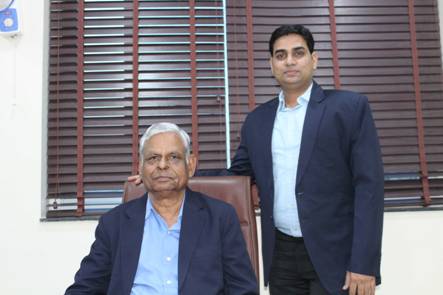 Elsewhere one of the doyens of the Indian textile industry J.C. Laddha, had similar plans for his son. J.C. Laddha has a vast experience in the textile industry from 1973 having worked with the RSWM group in the highest capacity. He already knew the advantages of Truetzschler machines as he was instrumental in setting up / modernising the various units of RSWM during his long stint at RSWM. When in 2006 Varun Laddha returned from USA, after completing his higher studies, he had a choice of joining a company or starting his own company. Fuelled by his extra-ordinary commercial knowledge and technical experience, J.C. Laddha guided him in setting up his first venture- Sudiva Spinners.

Varun, now a first-generation entrepreneur explained "Out of ring spinning and open end, I opted for OE process as my first project because it required relatively lesser capital investment. However to get the best quality yarn with highest productivity, we opted for the best in class machinery from Truetzschler"

At present Sudiva Spinners has about 74,000 spindles and 2208 rotors producing counts ranging from 6sNe to 40sNe having per day yarn prodn of 80Tons and 8Tons of knitted fabric. The latest project which was commissioned in 2018 was one of the first spinning Unit in India to opt for the latest "TC15 Cards with T Move and Jumbo cans". Today, the unit hosts 59 Truetzschler cards commissioned in 3 different phases. By focusing on product development and taking calculated risks, Varun has ensured that Sudiva Spinners not only dominates the domestic yarn market but is an impeccable supplier of yarn to more than 32 countries around the globe.

The charismatic and tech savvy D.P Mangal was the Executive Director of Rajasthan Spinning and has an experience of more than 40 years in the textile industry. He along with his son, Anand Mangal founded Lagnam Spintex in 2011 with four open end machines having 1920 Rotors fed by Truetzschler preparatory machines.  Anand Mangal completed BSC (Honors) in Business & Management Studies from University of Bradford, UK. He has also worked with ICICI Bank from June-2006 to Mar-2011. Since 2011 he is working as Managing Director of the company responsible for production, marketing, purchase and administration of the existing textile facilities. From the beginning D.P. Mangal was very clear to have the latest technology machines in his plant. So, it was no surprise that when they went ahead for expansion plan for 25,536 spindle plant in 2018, they opted for the latest TC 10 cards with the T-Move and Jumbo Cans. According to Mangal, Truetzschler's innovative T-Move and Jumbo Can Concept has provided them with greater benefits and improved process efficiencies, against a standard coiler solution. Presently, Lagnam Spintex has production capacity of 35 tonnes per day, out of which an astounding 50% goes for export with the yarn count ranging from 6 Ne to 30 Ne.

In a very short span, by harnessing the opportunities, Lagnam Spintex emerged as a manufacturer of quality yarn for both domestic as well as export market. Lagnam Spintex is one of the few spinning mill in the world to be certified by Uster, for producing top-quality open-end yarn. Lagnam prides itself in producing yarn of highest quality with Productivity & safety at all levels.

When asked about the current scenario of the textile industry both R.L Nolkha and D.P. Mangal showed their concern over the disparity in domestic and imported cotton prices caused due to the MSP. Varun Laddha on the other hand, voiced his concern over different states offering different power tariffs, which gives lower margins for manufacturers in states, which have dearer power supply. He demanded a One Country One Tariff regime.

When asked about A.T.E., Dinesh Nolkha remarked that over the last decade A.T.E. has grown as a company by bringing the most advanced and required technology to the Indian market. J.C. Laddha echoed his thoughts and said that A.T.E. understands the needs of the Indian customers and provides the right solution through principals like Truetzschler.

Looking at the trust bestowed by the esteemed customers it is fair enough to say that "It's True It's Truetzschler."