The emerging cotton industry of Ethiopia 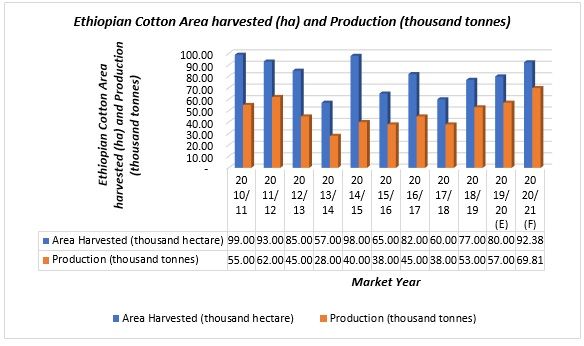 In May 2018, the Ethiopian Ministry of Environment, Forest & Climate Change (MEFCC) approved two BT cotton hybrids (JKCH1050 and JKCH1947) for cultivation as it was confirmed that these type of cotton are safe for the environment, ecosystem, and human health.

In Southern and Amhara regions of Ethiopia, cotton plantation in MY 2018/19 had got delayed due to late onset of rain. Some incidents of pests were found between August and mid-September. The farmers of the northern and northwest regions preferred the production of cotton over other commercial crops due to better price returns.

The harvests of MY 2018/19 faced the challenge of the unavailability of labour. Some of the large cotton farms in Amhara, Benshagul Gumuz, Gambela and Afar regions were affected by severe labour problem and were not able to manage the harvests on time. Approximately, 40 per cent of the cotton harvest was not picked on time.

Also, the turmoil caused by ethnic and tribal conflicts across regions have increased the labour issues such as erratic security problems, road blockages, and delayed harvests. Along with labour issues, the cotton farming got affected by land right issues, access to finance, improved seeds, agrochemicals, farm machinery, spare parts, and outdated ginneries among others. Cotton is a significant and critical crop for the country’s economy and development. Also, the country has considerable potential to increase cotton production if it can mitigate the effects of the challenges. The endeavour to have advanced contract farming and out-grower initiatives, triggered farmers to obtain relatively better access to domestic market, improved seeds, agro-chemicals, and technical trainings on agronomic practices and farm management. 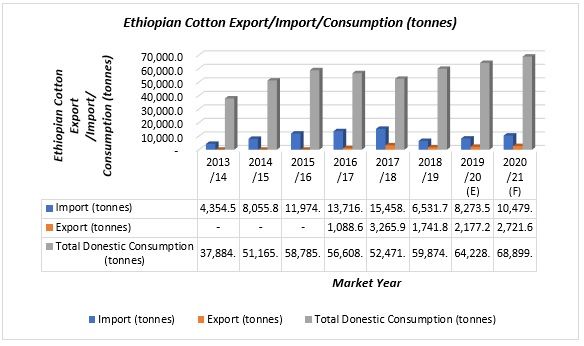 The domestic consumption of the country has been increasing due to growing demand from existing and newly installed spinning mills and increased number of textile industry parks. The handloom industry has shown vigorous growth, it mostly consumes cotton produced by smallholder farmers. The sharp increase in the country’s cotton consumption was anticipated mainly due to demand from the newly opened and planned textile and apparel industrial parks.

As per the Ethiopian Textile Industry Development Institute (TIDI), more than a dozen spinning mills have been planned in the short run. After the installation of the planned facilities, the country’s installed annual processing capacity of lint cotton will reach 200,000 metric tonnes mark.

Some difficulties faced in order to reach the maximum capacity of the existing spinning mills (currently about half capacity) are insufficient access to finance and forex, power outages and logistical challenges among other factors.

Since last two years, cotton producers have been trying to increase the exports of the cotton after the government removed the export ban on cotton. Despite attractive local prices, some commercial growers are trying to export cotton in order to earn foreign currency.

Mainly two price setting mechanisms are carried out in the country at present.

In the first case, Ethiopian Industrial Inputs Development Enterprise (EIIDE) buys cotton from local producers at fixed price. EIIDE then sets fixed prices based on lint quality specifications for Grade A, B, and C. At present, the domestic market prices for lint cotton at EIIDE range between $1.65 and 1.72 per kilogramme.

In second case, the price is taken from cotton transactions between local producers and textile factories. The seasonal average price of cotton in the local market is ranged between $1.72 and 1.89 per kilogramme, which is higher than EIIDE price. In both cases, the season-average domestic market prices for lint are still higher than international market prices which range between $1.54 and 1.56 per kilogramme. 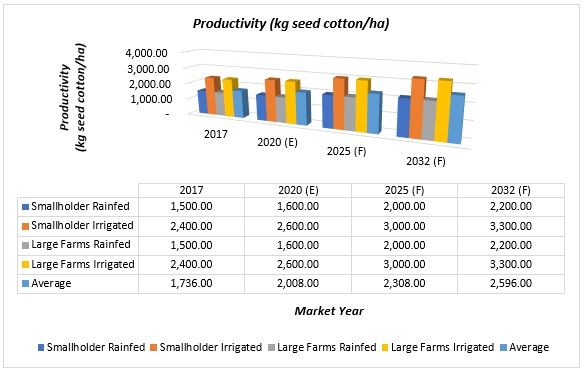 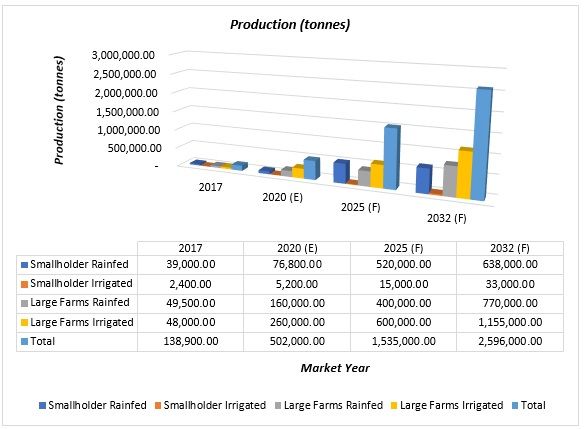 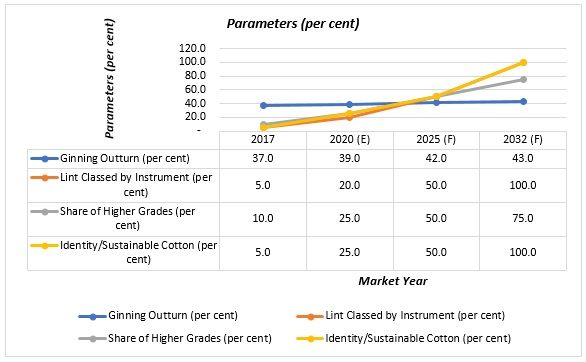 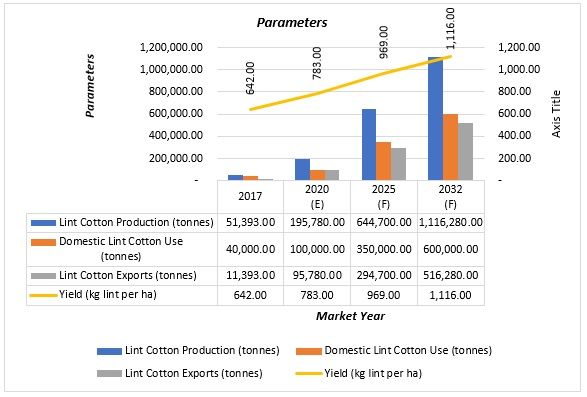 Under Ethiopia’s Five-Year Economic Plan (2015-2020), the government has planned a considerable investment to develop the textile and apparel sector. The GTP II has targeted export revenues up to $1 billion by the end of 2020. Beyond GTP II, the government has been trying to make Ethiopia the textile and apparel manufacturing hub of Africa with annual exports of $30 billion by 2025.

The Ethiopian government has launched the NCDS. Under NCDS, government has planned to make Ethiopia one of the world’s top cotton producers with annual cotton lint production of 1.1 million metric tonnes for the coming 15 years (2017-2032). The NCDS has proposed to Ethiopian Cotton Development Authority to oversee and implement plans to make the cotton sector more competitive.

The government of Ethiopia (GOE) is investing considerable resources to build textile and industrial parks around the country, while at the same time working to attract potential international investors. Foreign investors from US, China, Korea, India, Sri Lanka, Bangladesh, and others are setting up shop in these parks to take advantage of inexpensive labour and electricity costs, as well as other tax incentives.

Around 21 textile and apparel manufacturers are operating in the industrial park. Government has planned to import the BT cotton seeds from India for upcoming planting season. About 800 hectares of land has been planned for BT cotton plantings as a trial production.

The Ethiopian Industrial Input Development Enterprise (EIIDE) is mainly involved in the market stabilisation role. EIIDE makes up to bridge the supply and demand gaps of industrial raw materials, including cotton and other inputs. The state-run enterprise sources local and imported cotton, most of which is from India, to supply favourable credit terms to local textile factories. Some of the larger textile factories can directly purchase local or imported cotton. Cotton producers can also directly supply to textile factories where price is set through negotiations. Almost all large-scale cotton producers prefer to deal directly with the textile factories and sell their cotton at better-negotiated prices.