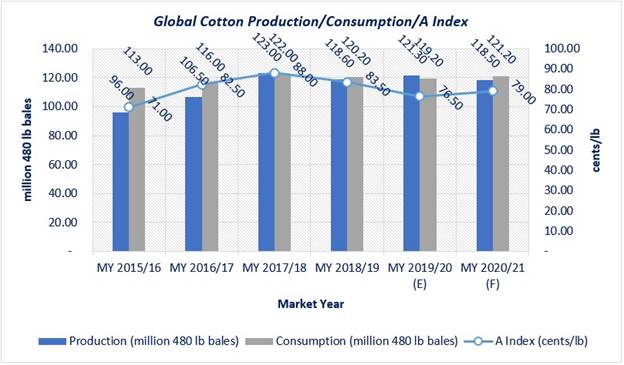 Total global cotton production is expected to reach 118.50 million bales in MY 2020/21, down by 2.31 per cent from MY 2019/20, with the declining cotton production area in a number of countries such as India, Brazil and the US. Cotton planted area has declined by about 4 per cent worldwide and is expected to offset the impact of rebounding yields in several countries. India’s MY 2020/21 cotton planted area is expected to fall by 3 per cent. At present, cotton prices in India are lower than the other crops competing for area. India’s MY 2020/21 cotton output is expected to reach 0.90 million bales showing a decrease as compared to the output in MY 2019/20.

Lower projected cotton planted area in Brazil is expected to cut the production by 1.2 million bales. Brazil had maintained the cotton planted area at record-high levels since last 2 years and has increased its underlying productive capacity significantly.

Australia’s cotton output in MY 2020/21 is expected to surge by 0.80 million bales. High rainfall in Australia from January 2020 improved irrigation supplies which are expected to boost plantation and bolster the dryland prospects. Pakistan’s cotton output is anticipated to rebound by 0.80 million bales from the year before. Slight movement is expected in China’s total cotton production from the year before in MY 2020/21. As per the current surveys of planting intentions, China’s cotton area in MY 2020/21 will be slightly reduced as compared to the year before. China remained at the top in cotton production from 1982 until 2014, when it was first surpassed by India. China again obtained the 1st rank in MY 2018/19, but India is projected to be again the world’s largest cotton producer in MY 2020/21, as in MY 2019/20.

Total consumption is anticipated to increase to 121.20 million bales in MY 2020/21 with a growth of 1.68 per cent from MY 2019/20. China is expected to resume and expand imports. According to the IMF’s January 2020 forecast, global income gains are expected in calendar 2020 and 2021. Hence the cotton consumption is possible to grow. The Phase One trade agreement between China and the US reduced the uncertainty on global income gains. But suddenly after the agreement, the worldwide spread of COVID-19 caused the uncertainty in the demand and consumption.

China’s consumption gain is expected to reach to 1 million bales in MY 2020/21 which equals half of global consumption gain expected. China is expected to consume 38.5 million bales of cotton in MY 2020/21. China is the world’s largest cotton consuming country. But China’s share in the world cotton spinning has been falling since 2009, which has stabilised in recent years.

Cotton continued to lose share to polyester in global textile and clothing markets with relatively moderate losses since 2012. The cotton polyester price ratio has risen in recent months but remained within the range established since 2015. The International Cotton Advisory Committee is forecasting only a small fibre share loss for cotton in calendar 2020. 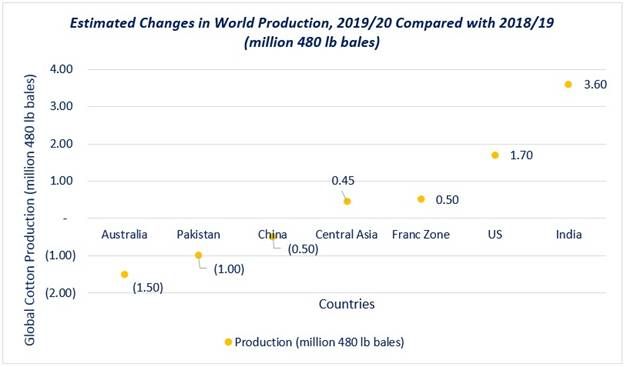 The global cotton export was 41.30 million bales (480 lb each) in MY 2018/19, which soared by 5.33 per cent to 43.50 million bales in MY 2019/20. The major exports from Brazil and the US have helped to fulfil the strong demand from China, Vietnam and Bangladesh. Also, the declined production in Pakistan and Turkey supported the overall cotton trade. China still holds the top position in the list of cotton importers despite the reducing cotton imports.

The supply from Brazil has been increasing with steady domestic demand and second crop (safrina) season. Cotton exports from West Africa’s Franc Zone is anticipated to move ahead from the previous year’s mark to reach 5.7 million bales, with Benin, Mali, and Cote d’Ivoire as the top three exporters in the region respectively.

China’s stock has dropped by approximately 2 million bales in MY 2019/20 from MY 2018/19. Higher global production and lower consumption mainly drove the stock-to-use ratio. India is anticipated to witness the highest rise, with stock projections reaching 13 million bales, moving up by 3.7 million from the previous year. The stocks of the US and Brazil are also expected to rise in spite of surging exports. Stocks apart from China are expected to soar by 9 per cent to reach 48.4 million bales. The world’s cotton export is anticipated to surge to 44.50 million bales in MY 2020/21 with a growth of 2.29 per cent from MY 2019/20. 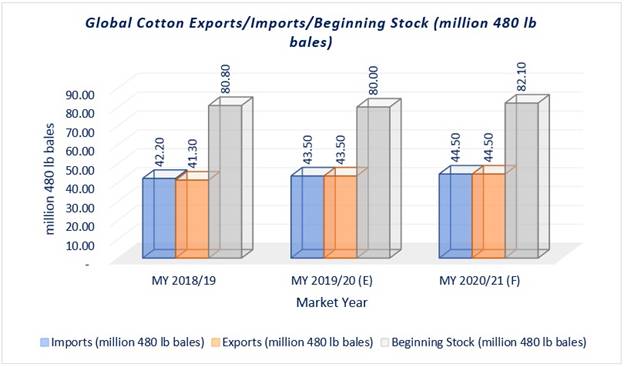 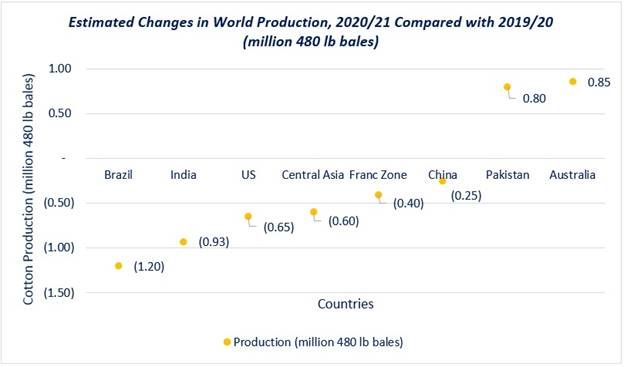 China’s imports are projected higher in MY 2020/21. Exports from the US, Brazil, Australia, and Greece are expected to be flat, while exports from Central Asia and the Franc Zone will be lower on smaller crops. Exports from India are forecast higher despite lower production and higher use as stocks held in the Minimum Support Price programme are pushed back into the market.