The History Of Androgynous Fashion Up To Contemporary Times

And to define it, we must first look at the origin of the word androgynous. Also, we’ll find out what an androgynous person is, in the context of fashion.

Androgynous comes from the Latin word ‘androgyne’ and has a Greek origin. The Greek word was constructed from andras (man) and gune (woman). Pronounced AN-druh-jin, the word described a mix of male and female physical characteristics.

Nowadays, androgynous describe an identity, under the non-binary and transgender umbrellas. Now, this might sound a bit complicated so I’ll briefly explain the difference between sex and gender.

What is the difference between sex and gender?

According to the World Health Organisation, sex is a biologically conferred characteristic, whereas gender is a social construct. As such, there are variations in how people experience gender, based on their own experiences, self-perception, and behaviour.

What is an androgynous person?

In this light, androgynes choose an identity that can be explained as either a blend of both or neither of the classic binary (male, female) genders. However, androgyny is often used in regard to sex or sexual identity.

Overall, androgynes self-describe as: between female and male; between man and woman; between masculine and feminine; “in-between” male and female gender; or, neither feminine nor masculine.

Throughout history, dressing styles were imposed, by social constructs, according to gender. For example, trousers were traditionally a male form of dress, frowned upon for women. However, social constructs do not fare well, especially when it comes to creative industries in general and fashion in particular. 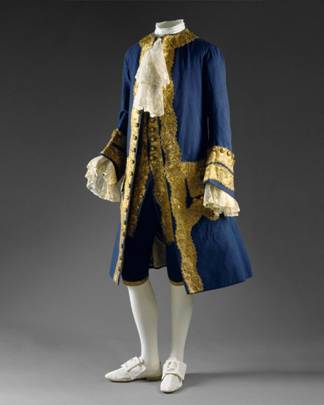 During the 1800s, driven by the industrial revolution and the uniforms it brought with it, the style uniformity between male and female started to gain ground.

The shift was accelerated by the army recruiting female spies, who had to wear special uniforms comprised of jackets and dresses over trousers.

Androgynous fashion started to gather steam when women felt their attires were limiting their performances and daily activities. The movement gained a lot of popularity when women activists emerged and began to wear men outfits. The best example is Luisa Capetillo, an ardent women’s rights activist, and the first woman in Puerto Rico to wear a men suit and tie in public.

Elizabeth Smith Miller is one of the first designers to jump on the movement, by inventing a unique trouser style, later called “the bloomer.” Elizabeth first showed “this unique style” to her cousin Elizabeth Cady Stanton, an American suffragist, social activist, abolitionist, and leading figure of the early women’s rights movement. Cady was very impressed with the look and the freedom of movement and about her experience of wearing trousers. 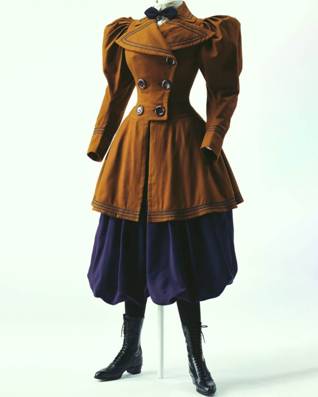 “Like a captive, set free from his ball and chain, I was always ready for a brisk walk through sleet and snow and rain, to climb a mountain, jump over a fence, work in the garden, and was fit for any necessary locomotion”, wrote Cady Stanton. “What a sense of liberty I felt, with no skirts to hold or brush ready at any moment, to climb a hill-top to see the sun go down or the moonrise, with no ruffles or trails impede by the dew or soiled by the grass,” she added.

However, what truly made popular the ‘pantaloon’ style was Amelia Jenks Bloomer, an American women’s rights advocate. Amelia helped to popularise ‘bloomers’ in the late 1850s, and hence, the bloomer style was consequently named after her.

“As soon as it became known that I was wearing the new dress, letters came pouring in upon me by hundreds from women all over the country. They were making inquiries about the dress and asking for patterns. It showed how ready and anxious women were, to throw off the burden of long, heavy skirts,” Amelia Jenks Bloomer. wrote, at that time. Shortly after, the style started to gain a lot of media recognition. The newspapers of those days described the style as: “Pantaloons or ‘Turkish trousers’ are men-garments designed specifically for women.” 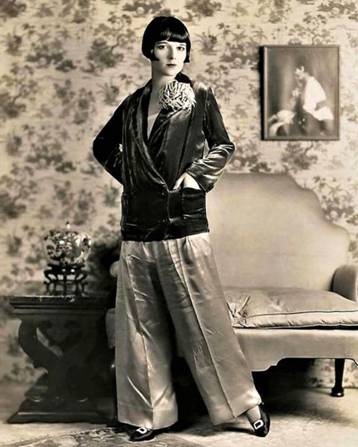 Starting in the 1900s, right around World War I, traditional gender roles began to blur fast, with a visible impact on fashion. Couture pioneers such as Coco Chanel and Paul Poiret started to popularise the ‘flapper style.’ Flapper style consisted of trousers and ‘chic bob’ hairstyle, marketed as the latest trend in women fashion. The flapper style gained much popularity with celebrities.

During the 1930s, the glamorous German actresses Marlene Dietrich was one of the first cinema stars to adopt the flapper androgynous style. Dietrich was often seen wearing trousers and suits at movie premieres.

The 60s and 70s were profoundly influenced by the women’s liberation movement. Also, the advent of media, in particular, cinema and music, played a critical role in the adoption of androgynous couture. These are the years when Yves Saint Laurent designed the ‘Le Smoking’ suit, a controversial statement of femininity that has revolutionised the idea of fashion. 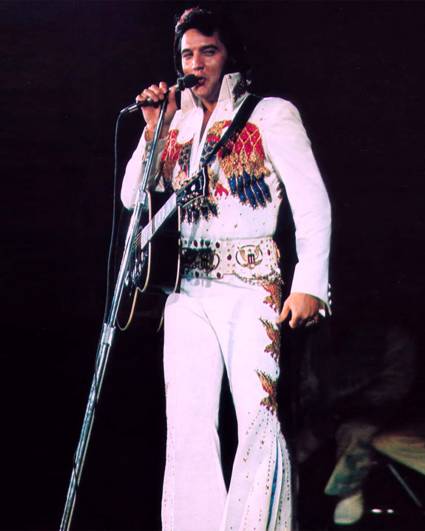 When talking about the role the music industry had on the development of androgynous style, we cannot miss Elvis Presley. Presley pretty face and use of eye makeup made people describe him as an “effeminate guy”. Moreover, an upsurge of androgynous fashion styles for men began after Rolling Stones’ performance in London’s Hyde Park in 1969. For that event, Mick Jagger wore a ‘man’s dress’ designed by the British designer Mr Fish, also known as Michael Fish. From then on, androgynous fashion became widely adopted by celebrities and fans from all over the world.

During the 1970s, Jimi Hendrix became famous not only for his music but also for his choice of wearing ‘women’ blouses and high heels. Also, let’s not forget David Bowie’s alter ego Ziggy Stardust. The ‘persona’ was introduced to the public when David launched his album ‘The Rise and Fall of Ziggy Stardust and Spiders from Mars.’ When asked to detail on the persona he was embodying, David described it as a reflection of his sexual ambiguity.

Under the influence of pop culture and cinema stars, androgynous fashion has entered the mainstream in the 1970s. Apart from David Bowie, the counter-culture ‘androgynous disco times’ remind us of Boy George, Prince and even John Travolta.

The 1980s fashion is taken over by the rise of avant-garde designers such as the Japanese designers Yohji Yamamoto and Rei Kawakubo. In one of his interviews, Yamamoto insisted that the combination of masculine and feminine characteristics into an ambiguous form should be celebrated by fashion:

“Androgyny it is an unbiased way for an individual to identify with one’s self and fashion is the perfect medium to achieve this,” Yohji Yamamoto. Yamamoto’s choice for ‘Androginy’ term as a way to describe this new type of fashion, who challenged the social constructs around gender, makes him the father of androgynous fashion. However long before Yamamoto, the ‘unusual men-women fashion combo’ trend had yet to be defined.

In 1968, the New York Times coined the term “unisex” and append it to all styles of gender-neutral couture. Following on, gender-fluid fashion, genderless styles, gender-free clothing, gender neutral fashion, and androgynous fashion were catalogued under a unified umbrella called unisex. 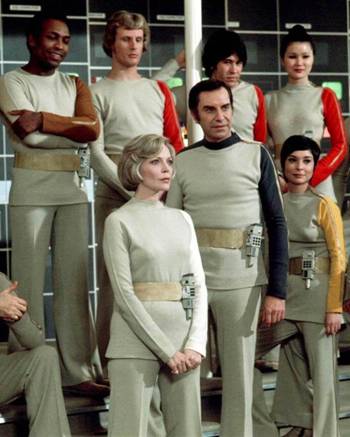 Gernreich was light years ahead of his times, not only when it comes to androgynous fashion. He predicted the evolution of accessories, as practical belts and wrist-watches combinations that can work as weather indicators, compass, and radio, or all-in-one.

“The clothes of the future will have to be functional and suitable for both sexes. Weather permitting, both sexes will go about bare-chested, though women will wear simple protective pasties,” says the designer while presenting his concept of androgynous fashion at the Osaka Expo, in 1970.

From a marketing perspective, unisex products make sense. Easier to pronounce, store, catalogue and sell. However, from a fashion creative perspective, the diversity of styles is a different story. With inspiring fashion shows in London and Paris, androgynous fashion designers began to gain popularity across America as well.

Similarly, the fashion media stated to introduce printed catalogues showcasing men wearing makeup and jewellery. The emergence of metrosexual men in the 2000s has been described as a related phenomenon, associated with the androgynous fashion trend.

Musical stars such as Brett Anderson of the British band Suede, Marilyn Manson, and the band Placebo have used gender-neutral clothing and makeup as well. These are key celebrities adding to the androgynous fashion culture, throughout the 1990s and the first decade of the 2000s.

In the early 21st century, a fresh breed of designers is looking to make androgynous fashion a mainstay in the industry. Also, as media is popularising the ‘androgynous look’, several celebrities are being hailed as creative trendsetters. These are modern times when androgyny is gaining massive prominence in popular culture. Celebrities are jumping in, by pairing with androgynous designers and gender-neutral clothing brands.

Lady Gaga, Ruby Rose, Lily-Rose Depp, and Jaden Smith are just some of the celebrities supporting the movement. 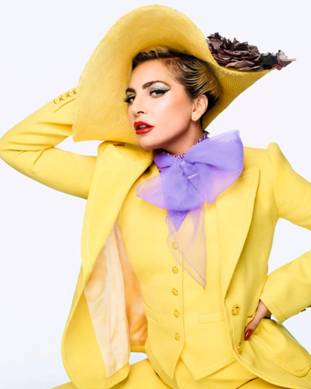 When interviewed on what drives them to create androgynous styles, the designers mentioned a desire for fashion creations to become new forms of self-expression. To them, it is imperative that fashion transcends one’s identity:

“Fashion must go beyond commercial marketing constructs and sales labels such as ‘unisex’, for ‘male’ or ‘female’,” Ty Ziskis, founder of ZED androgynous fashion label.