Mexico has become the principal market and sourcing destination for US after signing USMCA agreement. Along with Vietnam, it has emerged as a leading demand and supply base for textiles due to the Sino-US trade war and COVID-19 pandemic. A report.

Mexico became principal market and sourcing destination for US market after signing of United States-Mexico-Canada Agreement (USMCA). It has a population of 129 million people with large number of young populations who tend to spend more on clothing than their older counterparts.

A Sourcing Partner for America

Mexico is the major sourcing destination in the American region. Kearney, a market consulting firm, has given Near-to-Far Trade Ratio (NTFR) this year. This usually tracks the movement of US imports towards nearshore production in Mexico. Since 2013, the NTFR has consistently surged between 36 per cent and 38 per cent (for every dollar of US manufacturing goods from Asia, there were approximately 37 cents worth of manufacturing imports coming from Mexico). Mexico has gone from 38 per cent to 42 per cent due to expected USMCA agreement. On a dollar-value basis, total manufacturing imports from Mexico to the US increased 10 per cent between 2017 and 2018, from $278 billion to $307 billion, and by another 4 per cent between 2018 and 2019, to a total import value of $320 billion, based on the Kearney report.

Top diplomats from 13 countries of a cross-regional network, including Mexico, have agreed on key principles of keeping transportation links and supply chains open to cushion the impacts of COVID-19 on global trade and economy. It was recently established to look for a shared commitment to "promote and protect free trade" and other selected measures to tackle COVID-19. The fresh declaration was made by foreign ministries of The International Coordination Group on COVID-19 (ICGC) in April 2020.

According to OTEXA, Mexico has overcome China in denim apparel exports to the US due to the impact of COVID-19 in first quarter of 2020. But it fell by 28.85 per cent to ship $138.89 million worth of denim apparels to US. Mexico, one of the top suppliers of denims with logistical proximity to the US, faced a 27.20 per cent drop in exports in the first two months of the year to $91.98 million.

Mexico and Vietnam are making strides to bridge the demand and supply gap created due to the Sino-US trade war and COVID-19 pandemic. Both countries have different set of strengths and weaknesses. Investors can consider the following factors if planning to move operations to Mexico.

1. Mexico is the second-largest economy in Latin America and current GDP (gross domestic product) is US$2.7 trillion. It has shown annual average growth rate of 2.60 per cent for the past 20 years. It is one of the key trade partners for US.

3. Mexico's per capita GDP is US$10.405. In 2018, Mexico was the third-largest trading partner with US after Canada and China. Mexico is the first or second-largest export destination for 27 US states. It is the second-largest agricultural export market for the US and imported US$19.5 billion worth US agricultural products in 2018.

4. Mexico is a trading partner to more than 50 countries, with several FTAs with Europe, North and South America as well as Africa. It has around 13 FTAs, but despite this, more than 80 per cent of Mexico's exports are to the US.

5. Mexican companies and suppliers are familiar with US products and services. US businesses typically find it straightforward to market their products in Mexico.

6. Mexico offers similar labour rates as China and offers a highly skilled workforce along with infrastructure and supply chain networks.

7. Manufacturing in Mexico has been consistently increasing. It became the 12th largest exporter in the world. Major manufacturing industries in Mexico include textiles and clothing with raw materials coming from US, China, Japan, Germany, and South Korea, among others.

USMCA (The US Mexico Canada Agreement)

The US Mexico Canada Agreement (USMCA) would ensure Mexico's importance as a trade partner of US. USMCA includes important protections and updated rules of origin. In order to qualify for duty-free treatment under the USMCA, goods imported into US must conform to the Rules of Origin set forth in Chapter 4 of USMCA. Imported goods that "originate" in Canada or Mexico and those otherwise meet USMCA requirements are extended preferential treatment. The deal would also help industries including textiles and clothing. It would streamline customs clearances between the three countries. It would reduce costs and would implement a single-window system. The USMCA took effect on July 1, 2020. USMCA has a 16-year lifespan and could be revised after six years.

USMCA significantly improved and modernised approaches to "rules of origin, agricultural market access, intellectual property, digital trade, financial services, labour and numerous other sectors. This agreement boosted the $20 billion textiles and clothing trilateral trade between the US, Mexico and Canada. It would also increase textiles and clothing industry's exports, as well as investments and capacity in the region. The agreement has banned data localisation, a burdensome non-tariff barrier that requires data centres to be in the same country where the data is collected and protects source code. Mexico and Canada are among the largest export markets for US textile and clothing, totalling nearly $11.3 billion last year.

Greenwood Mills has converted its denim jeans production at a factory in Mexico to PPE production of non-medical face masks and hospital gowns. "USMCA has created more certainty in the western hemisphere and allows us to have a vision of how to continue to build the domestic textile platform and supply chain, while giving us the confidence to re-invest," said Cameron Hamrick, president of Hamrick Mills, a 119-year-old company based in Gaffney, SC, and producer of greige woven fabrics that has also pivoted to PPE production to help frontline workers.

Mexico's imports from Vietnam reached $497.2 million in January and February 2020. Of which, textiles and clothing contributed for $16.3 million. During the period from Jan 1, 2020 until March 15, 2020, many product groups have recorded high export growth from Vietnam to Mexico including textiles and clothing with contribution of $5.88 billion in total exports. Mexico also launched anti-dumping investigations on polyester yarns originating in China. 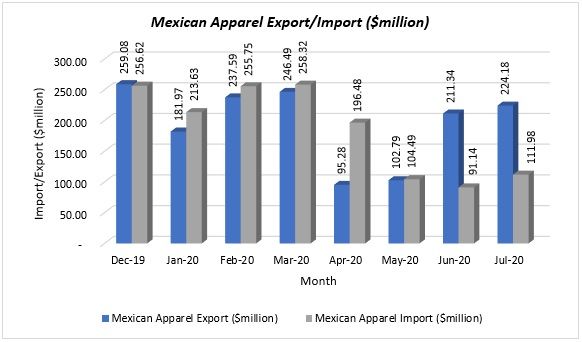 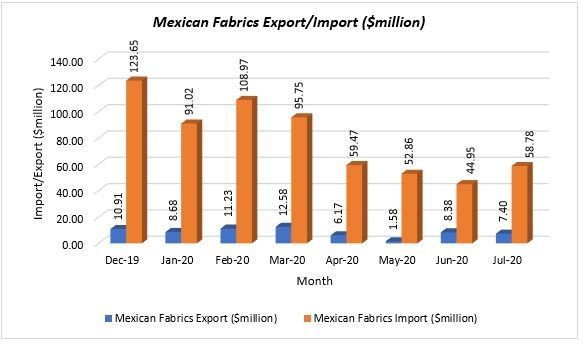 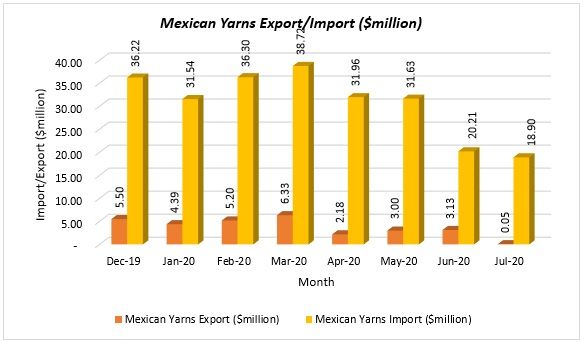 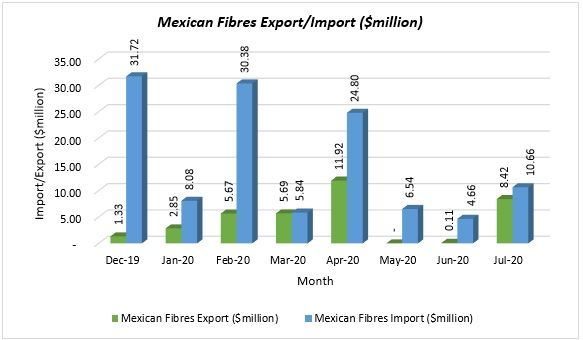