Demand for PPE in US rises during pandemic

The US became one of the severely hit countries due to the pandemic, with daily reporting of over 0.2 million new cases in the last two months of 2020. Such a situation forced US authorities to make the highest ever PPE imports and shield their healthcare workers from contracting the disease. A report.

2020 began in an unusual way with COVID 19 moving out of China and covering almost the entire world. Initially it began at a relatively slower pace. However, with every passing day the number of infections grew rapidly and with very little knowledge about its origin, mode of transmission, incubation period, the medication and the vaccination along with many other aspects associated with the virus, lead to chaos like situation globally.

Following uncertainties in the evolution of the virus, health authorities designed several preventive policies time to time. For instance, World Health Organization (WHO) initially said that masks should only be worn by health professionals or patients while they are in a hospital, but later on, after it established that there were possibilities of human-to-human transmission, it became apparent that everyone needed to wear a mask when they were in the public domain in order to prevent transmitting or contracting the virus.

During the second quarter of 2020, United States became the new hotspot of the COVID-19 after Europe and China, which were initially considered to be hotspots of the virus and since then the largest democracy in the world remained at the top of the most infected nation with over 21.3 million confirmed cases as on January 2021, with daily reporting of over 0.2 million new cases. During the initial days of the outbreak in the US, healthcare establishments across the nation witnessed severe shortage of personal protective equipment (PPE) needed by healthcare workers fighting the COVID-19 pandemic, primarily due to shortage in supply leading to exhaustion of reserved stocks across the country.

However, authorities caught up on the demand with the increase in supply and restoration of transportation from major export nations like China. The pandemic outbreak in the country has forced authorities to make the highest PPE imports during Jan-Oct period as compared to same time period in the recent years and it is very likely that PPE imports can further go up in 2020 and 2021 looking at the grim situation of the outbreak in the United States. 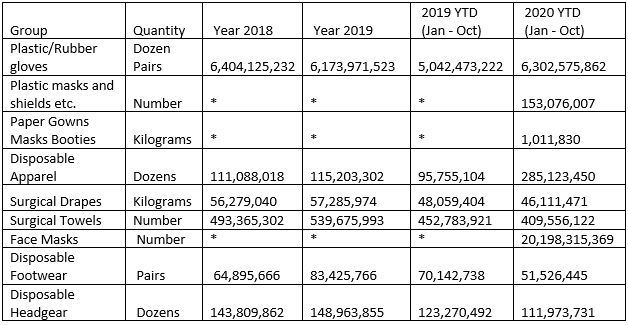 * indicates data not available due to new statistical breakouts effective July 1, 2020 by US Health Department (CDC)

PPE imports in 2020 (Jan-Oct) period witnessed a staggering growth of 312 per cent in terms of value to reach $16.5 billion in first 10 months of 2020 as compared to the same time period in 2020; the overall imports in terms of value are expected to go up further as the nation witnessed the worst phase of pandemic registering more than 0.2 million cases per day in the last two months of 2020.

In terms of trade partner, China emerged as a clear winner for PPE exports to the US and accounted for approximately 68 per cent of the overall imports in terms of value followed by other nations namely Mexico, Malaysia, Vietnam and Thailand.

Looking at the current efforts to tackle the pandemic and its long term effects, healthcare agencies across the world are preparing themselves for the long term battle and hence it is evident that these agencies will dedicate large chunk of their spending towards these protective gears in order to keep their front line workers battle ready for the upcoming challenges in the near future.

By:
Fibre2Fashion
Published: Jan 2021
Tags :
Reuse this Content
Our Clientele