From the treasure chest of India's textile art is the Karwath Kathi sari woven out of the finest Vidharbha tussar. Inspired from the gamchha or functional handcloth spun about a hundred years ago, this coarse fabric was transformed in the nineties into amazing Karwath Kathi saris.

The beauty of our heritage Indian textiles lies in the fact that it is a never ending process of learning and research, especially so in the realm of fashion and textiles. To illustrate this, the natural dyes used in 3000 BCE at Mohenjo Daro are still the buzzword for sustainability and eco-friendliness, the new mantra to solve some of the problems of global warming to eliminate chemical toxic waste. Similarly, India's legacy of heritage handloom and handcrafted textile products is a proof that these are living, breathing art, not to be merely preserved in museums, but functional and popular.

Among the myriads of traditional textiles that India enjoys, whether woven, printed, dyed, embroidered or hand-painted, whether catered to erstwhile royalty or to the masses, every piece speaks volumes of its artistry or mathematical genius of the human mind, the logical knowledge and thoughtfulness of the process, and finally the vision of ecological wisdom. Who, why, how, and all other curious questions find its solution either in the concept, method or in the final product, from fibre to fabric.

In the late eighties and early nineties, India saw a kind of renaissance in Indian textiles. The government's Handloom Board decided to give the then languishing handloom industry a thrust by creating more awareness nationally and internationally, through research, revival, upgradation of skills and designs, and through grand travelling exhibitions like Vishvakarma, Festival of India and Costumes of Royal India, some of which were held in the main metros of India and some in London, New York and Paris. 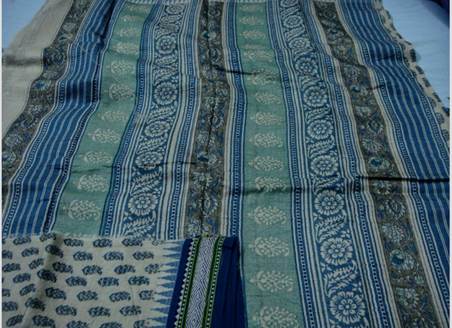 A gem of a craft that got revived from this treasure chest of textile art was the Karwath Kathi sari woven out of the finest Vidharbha tussar. Inspired from the gamchha or functional hand cloth spun about a hundred years ago, this coarse fabric was transformed in the nineties into amazing Karwath Kathi saris. Karwath in Marathi refers to the serrated or saw-edged wooden instrument used for cutting. These triangular forms above the border, which are now commonly referred to as temple borders, were woven along with or interlaced with the warp and weft tussar ground, just above the point where the body is interlocked with border. This appears like a neutral alternate border between light tussar base and the contrast base colour of the borders. The gamchha used to be woven with rough cotton yarns of 20s count and then the highly unreeled two different threads of twisted yarn called Dongri tussar was introduced as weft. Over the years, it refined to smoother yarns for royal use as towels, angavastra or stoles, or even tied as a handy head cloth.

With the abundance of tussar yarns in the Vidharbha region, with the design input of zigzag borders, and the combination of silk tussar body with cotton borders, the beautiful Karwath Kathi sari was born.

Launched in the nineties, this reasonably contemporary but traditional designed sari has enjoyed its quiet and dignified place among the multitudes of more popular heritage saris of India. In the plethora of old and new fabrics and fast changing trends, the case of the Karwath Kathi sari is one where good points fail to get noticed, a case where sometimes the discerning piece is lost among the glamour and glitter. Hence, an acquired sartorial taste that has taken its own sweet time for recognition.

Karwath Kathi saris are woven in hand operated pit looms of three ply shuttles. The warp and weft are tussar with serrated horizontal border line at the ends joined with cotton borders, the opposite of Gadwal saris from Andhra Pradesh that are woven with fine count cotton yarns in body with silk zari borders and pallu in contrasting colour. The cotton borders in Karwathi sarees have ornamental lines and motif designs woven aesthetically in silver white extra warp or weft threads in both border and pallu. The Karwathi sari has been a reflection of its local culture, as it was worn during rituals, marriages, and festivals. The design narrative in the borders were the simple eight petalled flower or rudraksh motif enclosed with running lines in conjoined geometrical shapes triangular, round or rectangular. The hand skill, deft fingers, the unevenness of the handloom cloth, its breathable quality and suppleness counterbalanced by the perfect fall of the saree and pallu, its firm selvedge, its durability, all put together has given Karwath Kathi saree an important status in the history of Indian handlooms. 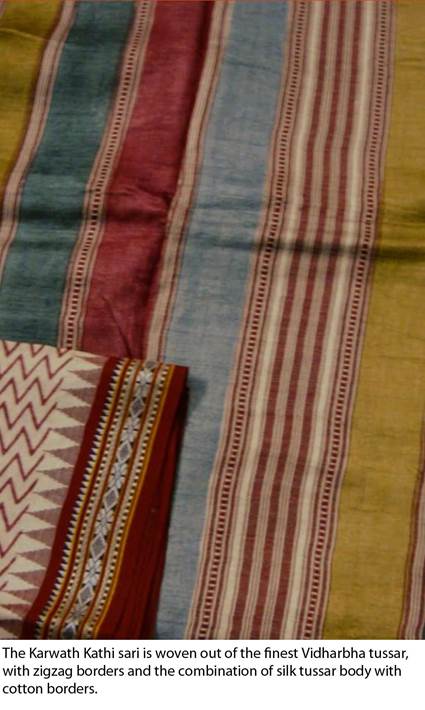 The Karwath Kathi sari has got its geographical indication registration from Vidharbha, Nagpur and Bhandara districts of Maharashtra. Tussar sericulture farms for cocoon breeding and silk extraction are found in and around Vidharbha and Nagpur, in places like Chandrapur, Gondia, Almodi, Andhalgaon, Ambegaon, Pauni and Gadchiroli. Silk farming and breeding is an empowering tribal community activity, whereby the silk yarn and cocoon distribution is controlled by the Maharashtra State Handloom Corporation (MSHC) through tenders and auctions.

The yarn is purchased by both private parties who deal with commercial retail, as well as state government-appointed mahajan, who acts as the head of a guild-like community of weavers. The mahajan possesses several looms and distributes the yarn to the weavers, who weave the sari and give it back to him at a fixed cost. For the hapless handloom weaver, work is labour-intensive and time-consuming. The weather-beaten pit loom weaver, who works all day in the sweltering heat, is bereft of even a table fan, since the breeze could snap the delicate threads while weaving. Hence productivity and income have been low. The average age group of the weaver is over 50. The younger generation is not much interested to continue and preserve this art. Certain mechanical devices to speed up production were introduced later into the loom, mainly inspired by Dobby and Jacquard, by the Handloom Board.

Recent innovation of the 'catch-cord' system in the loom device has speeded up and yielded good results. In place of one sari that took seven to eight days to weave in the past, the production is now one sari a day for weavers who have adapted this new technique. Where the weaver earned rupees one thousand five hundred per sari in the nineties, he now earns ?2,500 per sari a day. Among the state's handloom weavers, only seven looms have adopted this 'fly shuttle' technology, as it is difficult to change the mindset of the traditional weavers used to their old ways.

Today there are 50 handloom weavers under MSHC and about thirty weavers who work for the private sector. Due to the demand for fast-changing trends, private parties compromise on the design essence and quality of the original Karwath Kathi sari. In the spurious act of cutting costs and earning larger margins, the power loom Karwathi sari is passed off as handloom to ignorant customers. There are many tricks of the game. There could be mixed yarns of inferior quality, sometimes even viscose yarns dyed into tussar shades for weft in the body area, with acid dyes that have poor fastness to rubbing, washing and light.

MSHC, which markets through its 'Indrayani' label, preserves the originality of the Karwath Kathi sari by using only metal complex dyes conducive to tussar, and vats and reactive dyes for the 2/20 cotton yarns used in the borders. Chinese tussar warp yarns of 35 gms denier, which come in unbroken long rolls, now facilitate faster weaving and ensure smooth warp finish without threads snapping and a continuous flow of work. The tussar reel yarn is only used in weft to retain the original hand woven look of the sari.

I was fortunate to have worked on the Karwath Kathi sari project for the Development Corporation of Vidharbha Limited (DCVL) under Development Commission Handlooms in the early nineties, assigned by the freelance designer programme by Weavers Service Centre, Mumbai. I visited some of the looms in villages in and around Nagpur, and watched the weavers work, tried to understand their design sensibilities and their psyche. I made subtle and basic changes in border and Karwath design motifs, layout in pallu and colour schemes to maintain the essence without moving away from the original and not confuse the weaver with radical ideas, resulting in an enriching personal experience for me. My presentation at the Handloom Board was well received and translated into successful sales over the years. This led to further experimenting on Karwath Kathi sarees with block printing and hand painting in my studio with a series of signature line saris, scarves, stoles, dress materials and made-ups in tussar fabric for various other exporters and retailers with whom I have had the pleasure to design to date. It is only at 'Indrayani' and other government cooperative stores that the Karwath Kathi sarees have the GI tag as well as the 'Silk Mark' on it. One can never be sure of its genuineness at other retail outlets unless one has the expertise.

The Karwath Kathi sari needs to be popularised to raise more awareness about the product to sari lovers. In its own way, it is making a fashion statement today among sari aficionados. There is a demand in metro cities where fashion conscious women know that they can never go wrong with this piece-de-resistance. Being silk, it can be worn as formal wear. It can be spruced up with colours and accessories or dressed down simply in all its natural simplicity yet retain its understated elegance. However, production is small as the Handloom Board is cautious enough to preserve it in its original glory. The board deserves to be lauded for this move as it not only provides a point of reference, but also maintains the dignity of the handloom as against the crass commercialisation of the power loom market.

As the power loom has overtaken the handloom in the sense that it can replicate the exact look of a hand-woven fabric, it has become all the more imperative to save all that is unique and intrinsic only to handloom features. For example, the handloom sari has extra threads hanging loosely at the end of the pallu that can be knotted to make pretty tassels; the reverse side is often a replica due to highly complicated skills of mind-body coordination in hand weaving; the uneven and rugged surface gives the handloom cloth its ethnic appeal. After the natural treatments at yarn, weave or finishing stage, the handloom sari becomes more resilient, breathable and easy to drape. And finally, the individual sense of talent and pride that comes from handwoven can never be the same in machine manipulation. In Karwathi sari, the woven decorative borders with extra warp/weft designs in pallu edge substitute for fine selvedge which gives weight and good fall to the drape.

While change and progress is not to be ignored, the lessons to be learnt from traditional roots remain invaluable for future generations. The dilemma between the traditional and the modern must be seen as a healthy balance, of prosperity and development as symbolised by the power loom, and the desire to retain tradition and identity with the hand loom, in turn, contributing to the weavers' enhancement. 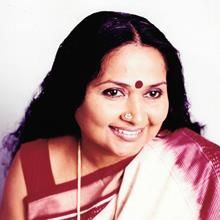