South Asia has always been a top exporter of textiles and apparels to the EU28 (The 27 member countries of the EU), with India, Pakistan, Bangladesh, and Sri Lanka always occupying the top spots. But all this has changed since the Covid-19 pandemic hit the world last year and there has been a considerable drop in the exports to EU28. A report. 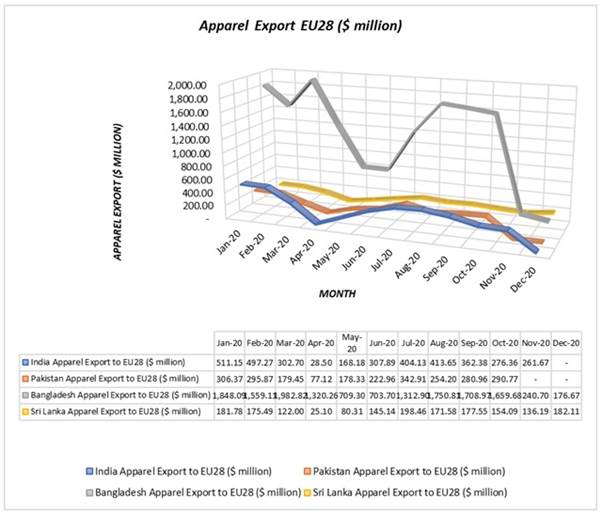 South Asia is a very well-known region for the textiles and apparel supply all over the world.  India, Pakistan, Bangladesh, and Sri Lanka are the top textiles and apparel exporters of the region to the EU28. Apparels, fabrics, and home textiles are the top three categories for exports from this region to EU28. The total apparel export from these countries to the EU28 was $22.69 billion in 2020.

Bangladesh was the largest apparel exporter to the EU28 in this region and the exports were valued at $14.97 billion. Bangladesh contributed approximately 66.00 per cent of the total apparel export from the countries of South Asia, followed by India and Pakistan. 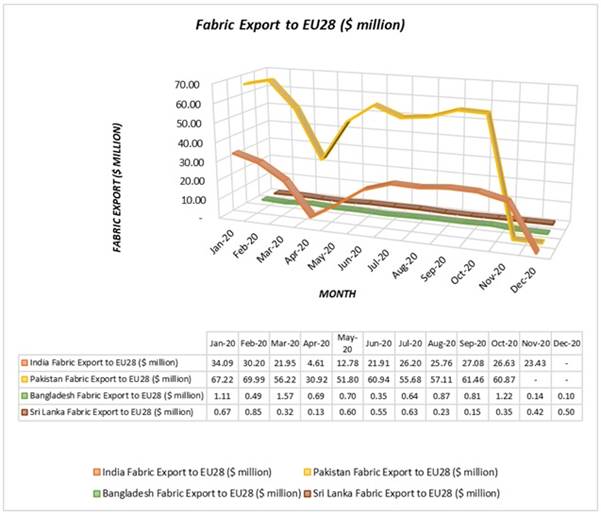 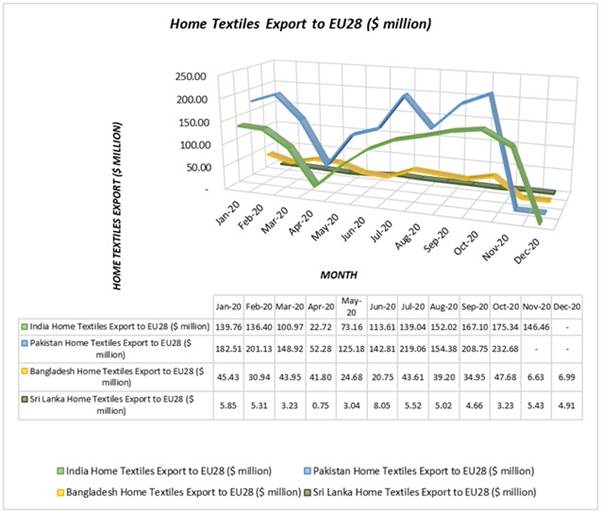 Now the market is recovering from the adverse conditions brought in due to the spread of COVID-19 with increased demand and new purchases after the lockdown. It may increase by 5.00 to 10.00 per cent in 2021.

According to the chairman of Apparel Export Promotion Council (AEPC) of India (AEPC), India must develop the Free Trade Agreement (FTAs) with major importers of apparel such as the US, the EU, and the UK to recover from the impacts of COVID-19 pandemic. India faces 9.60 per cent duty for apparel exports to the EU and its neighbours such as Pakistan, Bangladesh, and Sri Lanka do not need to pay any duty to send their apparel into the EU.

The US is the major market for Indian apparels and FTA of India and the US would benefit Indian textiles and apparel industry a lot. An average tariff on apparels from India in the US is 12.50 per cent, and the peak tariff on certain items is 28.00 per cent.

According to the Tirupur Exporters’ Association (TEA) and Federation of Indian Export Organisations (FIEO), India must look for long-term benefits with the help of proper vision. India should discuss the agreement talk that had started in 2007 to overcome competition from Bangladesh, Pakistan, Sri Lanka, and Vietnam.

India and the UK have been discussing for enhanced trade partnerships. The FTA could be signed by June 2021.

In January 2021, the textiles and apparel manufacturers of Pakistan have faced many overseas order cancellations as the government of Pakistan had decided to cut gas supplies for power production to their units and provide electricity through national grid system. But the industrialists do not have trust on the brittle national power grid system. Also, the production cost for captive power plants is much lower than the cost for power generation from national grid.

According to the Pakistan Cotton Ginners’ Association (PCGA), approximately 5.49 million bales of cotton have arrived in 2020/21 season by January 15, 2021 with a plunge of 34.12 per cent compared to arrival of 8.338 million bales during the corresponding period of last season. The cotton March contracts have moved up to 82.59 cents per pound with an increase of 1.20 per cent. Cotton outputs of the country have also decreased due to the drop in the harvested area and yield. It also impacted the textiles and apparel exports of the country.

The Pakistan government has approved the cross-border import of cotton yarn with shortage and increased domestic prices.

The EU has extended the Generalised System of Preferences (GSP) Plus status for Pakistan for two more years, allowing the country access to preferential duties on exports to the EU. According to the the EU’s ambassador to Pakistan, Androulla Kaminara, country’s exports have considerably surged after the extension of GSP status.

Apparel exports from Bangladesh may get tariff benefits in the EU under Everything but Arms Initiative after 2024 and its graduation from the group of least developed countries (LDC) to developing nation.

Bangladesh government has requested the EU to keep the duty-free access to their products after graduation and presented it with proofs. According to the EUI, if Bangladesh achieves considerable improvement in labour rights, human rights, good governance, and protection of environment then they will get the GSP plus benefits after graduation.

Bangladesh has inadequate number of labour courts and labour tribunals across the country. It is critical for Bangladesh to get the GSP plus status as approximately 3/5th of the total export and 2/3rd of the total garment export is transported to the EU with zero duty under the EU's EBA.

Spinning mill owners have started investing in the synthetic yarns as it has a huge demand in international markets from couple of years. The transport charges have increased with unavailability of containers and delays in receiving imported raw materials. It led to a higher price of fabrics in overseas markets which favoured the country’s textiles and apparel industry.

In February 2021, the UK had committed to continue the GSP for Bangladesh after its graduation to a developing country from a LDC status.

According to the agreement, the UK and Bangladesh would cooperate in investment, Bangladeshi professionals into the UK service sectors, trade facilitation, ease of doing business, development in finance of nation, higher education, taxation and intellectual property protection (IPP).

In order to recover from the impact of COVID-19 pandemic, the Bangladesh Bank has enhanced credit limit under the Export Development Fund (EDF) for 6 more months. But only the members of Bangladesh Garment Manufacturers and Exporters Association (BGMEA) and Bangladesh Textile Mills Association (BTMA) can avail it until June 30, 2021. In May 2020, bank had increased the credit limit under the fund to $30 million from $25 million for the members of BGMEA and BTMA, applicable till the end of 2020. This would help them to purchase raw materials and produce export-oriented products.

Due to the impact of the pandemic, the Bangladesh bank expanded its fund's size from $1.5 billion to $5 billion. The bank also lowered the interest rate on the loans under the scheme from 2.00 per cent to 1.75 per cent.

Recently Sri Lanka and China have signed an MoU to boost bilateral apparel trade and recover from the impacts of the COVID-19 pandemic. This would improve the working relationship between the two countries. This will also promote value chain cooperation between the two countries. Sri Lanka is also looking forward to investment from China for the upcoming textile park in Eravur.

By:
Fibre2Fashion
Published: May 2021
Reuse this Content
Our Clientele