Fast Fashion 2021 Guide – What It Means, Problems, And Examples

What is fast fashion and what is wrong with it?

If you Google the term ‘fast fashion’, several definitions pop up. In this article, we’ll dissect the origin of fast fashion, and see what it really means. I’ll then share with you several great examples of fast fashion brands and how their actions (business approach, materials used, etc) put them into this category.

Finally, we’ll look at some of the biggest problems caused by fast fashion, such as modern slavery, pollution, and waste, and what you can do to end them for good.

What Is Fast Fashion?

Fast fashion is a term used to describe all encapsulating parts of a business model based on copying and replicating high-end fashion designs worn by celebrities or seen on the catwalk, by mass-producing them at low cost, and the effects resulting from such practice.

The term ‘fast fashion’ is also used to describe the resulting parts of the fast fashion business model, such as garments and accessories, resulting in waste, child labour, depletion of resources, and more.

Here are some of the most popular definitions of fast fashion:

“Inexpensive clothing produced rapidly by mass-market retailers in response to the latest trends.”

“An approach to the design, creation, and marketing of clothing fashions that emphasises making fashion trends quickly and cheaply available to consumers”

“Fast fashion is the term used to describe clothing designs that move quickly from the catwalk to stores to take advantage of trends.”

“Fast fashion can be defined as cheap, trendy clothing that samples ideas from the catwalk or celebrity culture and turns them into garments in high street stores at breakneck speed to meet consumer demand.”

The financial success of the fast fashion model is attributed to its speedy process and consumers’ desire to associate with celebrities and wealthy ones. For instance, a designer label requires, on average, approx. six months to design, manufacture, and launch a new collection.

On the contrary, a fast-fashion brand requires less than a week to find online, copy, and replicate the designer’s entire collection.

The fast-fashion business model is fairly new, empowered by the internet and especially by social media posts. In the past, scouts of fast fashion brands had to attend (physically) catwalks to film and copy high-end designer creations.

Or, recourse to posts on printed magazines to copy and replicate rare haute-couture and limited edition designer creations. Nowadays, fast fashion brands have armies of spies scouting celebrities on Instagram 24/7, ensuring that the copying process is almost instant.

As soon as a celebrity wears a unique designer piece on social media, fast fashion spies spot it and start the ‘stealing’ process. Then, the pics with the celebrity wearing those designs are collected and sent for approval. If the style is deemed financially sound, the copying-replicating process begins immediately.

In less than two weeks, millions of copycats are manufactured in China or Bangladesh and shipped all over the world to fast-fashion retailers like Boohoo. While not illegal, the fast fashion business model is unethical for several reasons; child labour, modern slavery, toxic dyes, mass manufacturing, unsustainable materials, in the process generating a significant amount of waste and pollution.

Fast fashion companies thrive on ‘low-cost-super-fast’ cycles of copying, manufacturing, transportation, and retailing. The standard turnaround time of six months, from the catwalk to consumer, is compressed to a matter of mere weeks.

But, while very fast, the fashion business model comes with a world of problems, as detailed below: 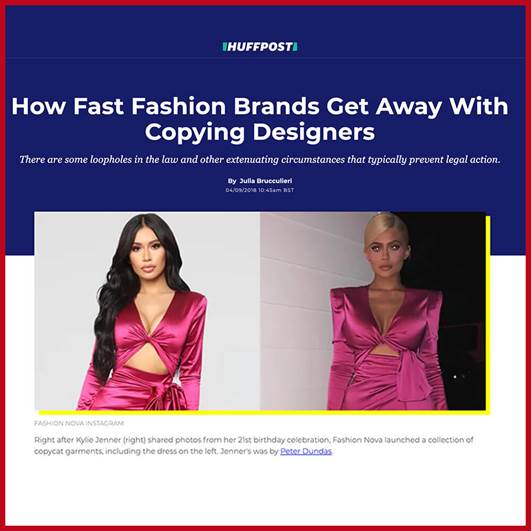 Beyond the ripping off of other’s work, fast fashion creates severe ecological and ethical problems. A recent report highlighted that over 87 per cent of fast fashion brands are sourcing materials and labour from China, India, Pakistan, and Turkey, with serious consequences for the environment. 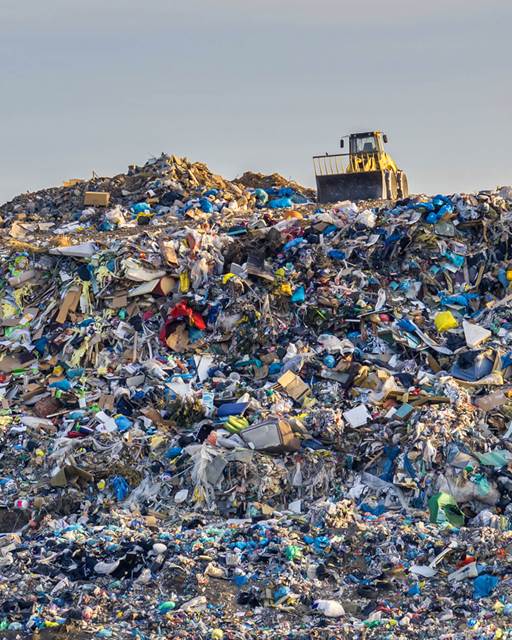 Moreover, from all fast fashion giants investigate, only Zara and H&M have proper waste management and recycling policies in place. Granted, not everybody can afford to dress like a celebrity, with the price tags straight off the catwalks of London Fashion Week.

But that’s not an excuse to let fast fashion companies deplete, pollute, and destroy the environment with millions of copies that almost always end up in landfills.

“In relation to the planet and the fashion industry, the fast fashion business model is a parasite that depletes the body. Fast fashion does not create anything new or useful; its only role is to copy and multiply, again and again. In the process, it depletes vital resources and creates waste, to a point when there’s nothing left and the body dies,” Explains Laurenti Arnault, CEO of Wardrobe of Tomorrow, a highly curated marketplace dedicated exclusively to sustainable designers from all over the world.

While purse-friendly, fast fashion comes at a cost, somewhere else… The high speed of manufacturing required by fast fashion creates further issues relating to low wages and poor working conditions. 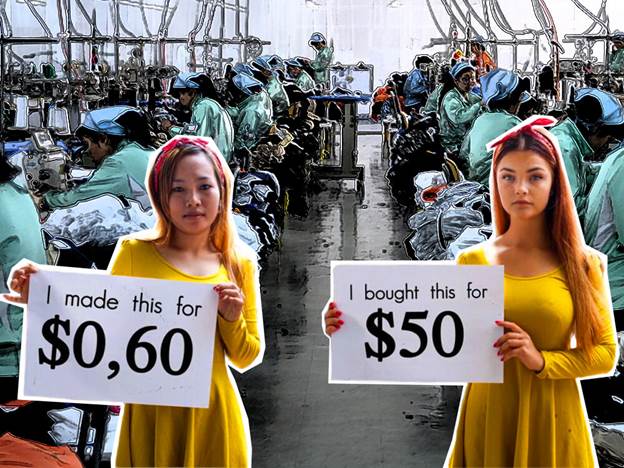 Low-cost manufacturing requires not only low-cost materials but also cheap labour. According to a survey by ‘Fashion Checker’, 93 per cent of fast fashion brands are not paying garment workers a living wage.

To keep manufacturing costs low, fast fashion brands have moved production to ‘developing’ countries where labour is unethical, inhuman in what the media describes as cases of modern slavery in fast fashion. 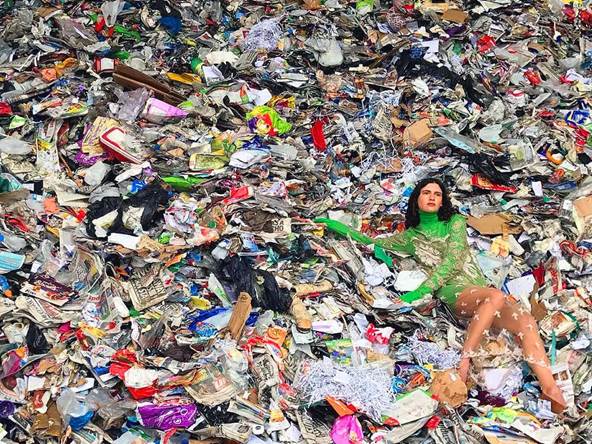 According to a former Topshop brand director: “Girls see a celebrity wearing something and want it immediately.”

For the fast fashion business model to thrive, the creation of trend-relevant products designed to trigger one’s impulsive buying behaviour is key. Moreover, for the cycle to continue, the fast fashion business model employs a planned obsolescence strategy, as described by Guiltinan (2009), “Limited functional life design and options for repair, aesthetics that lead to reduced satisfaction, design for transient fashion or enhancement that requires purchasing of new product features. Fashion, more than any other industry in the world, embraces obsolescence as a primary goal; fast fashion raises the stakes.”

However, as soon as the trend ends, these “low quality – low price” products are discarded by consumers in a process called the throwaway culture. According to The Guardian, one in three young women, the biggest segment of fast-fashion consumers, consider garments worn once or twice to be old.

Here are some of the most popular fast fashion conglomerates known to shamelessly steal and replicate designs:

Missguided peaked media attention when it got embroiled in a scandal with Kim Kardashian-West. It started when Kim took to social media to condemn fast fashion brands for stealing designers’ work. Kim posted on Instagram a pic wearing a dress made by Kanye, pleading:

Going through old fitting pics & found this gold look that Kanye made for me, for my Miami trip last summer. I went w the neon vibes instead. P.S. fast fashion brands, can you please wait until I wear this in real life before you knock it off? 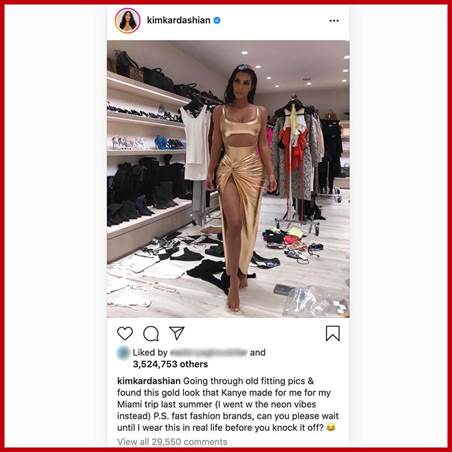 Almost immediately, the fast-fashion giant replied on their Instagram acc:

“Kim Kardashian you’ve only got a few days before this drops online!”

At first look, Missguided’s reply could be interpreted as a joke. Yet, this was not the first time when Missguided copied and replicated Kim’s style. The fast-fashion brand had been reposting Kim’s Instagram snaps – with its own logo on – several times. 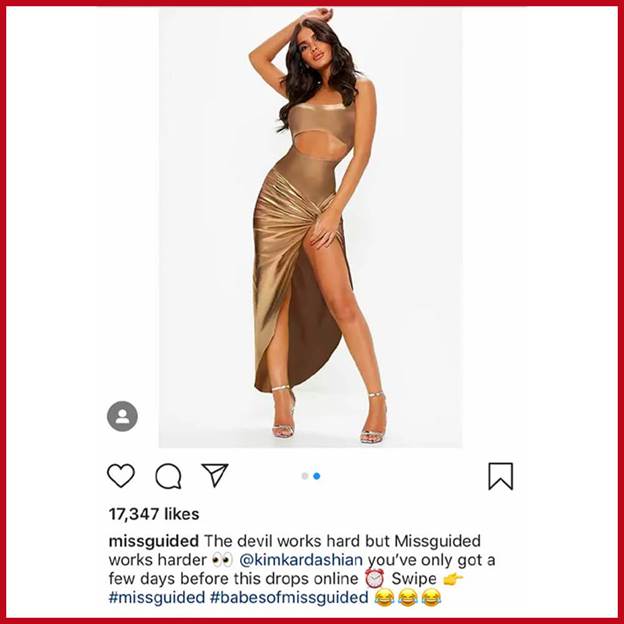 It also featured on its Instagram page many photos of Kim and Kanye West, like memes, aiming to make it look like the celebrities were endorsing the brand. Missguided using Kim Kardashian's image to promote its stolen designer styles

And, to top it up, the British fast-fashion giant created a ‘Crushin’ on Kim K‘ section on its online marketplace. The section held looks worn by Kim Kardashian, paired with the brand’s cheaper alternatives. The stealing got so bad that Kim had no alternative but to take the fast fashion brand to court.

Missguided has used Kardashian’s name and likeness in conjunction with its brand. In the process, it has violated trademarks around her name, which has been used to advertise company’s own products.

Immediately, Missguided’s post – in which the company says it’ll have an identical dress in a few days – was removed from their Instagram account. Then, the fast-fashion giant followed with a statement: Any action based on online banter would be meritless. Missguided shoppers know the score; we’re about the celeb looks, for people without their bucks. For the record, as much as we love her style, we’re not working with Kim on anything.

Needless to say, Kim Kardashian won the case against Missguided. Nevertheless, the stealing continued… but, with different celebrities this time!

Another case that sparked media attention was Old Navy vs Carrie Anne Roberts, a single mom British designer, creator of the clothing brand Mère Soeur. One day, Roberts found out that Old Navy is selling a copy of her most popular T-shirt, for half the original price. 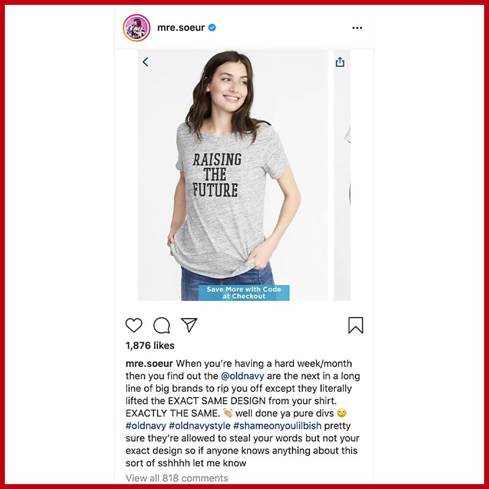 The t-shirt has “Raising the Future” printed across the chest and is one of Roberts’s best-selling products.

On Old-Navy’s official website, the knock-off was identical. Infuriated, Roberts posted the Old Navy dupes to Instagram, lamenting about being copied by such a huge brand. “Big businesses see small businesses like mine as idea generators and nothing more. But the idea behind this t-shirt has inspired my whole business. It is my business. Now, stripped of all its meaning, it feels violating,” said Roberts.

After over 800 comments of support, many from people who also left angry comments on Old Navy’s Instagram posts and negative reviews on Old Navy’s website, the fast fashion contacted Roberts.

In their email, Old Navy was arguing that Roberts didn’t trademark the phrases “Raising the Future” or “The Future.” Therefore, she does not have a trademark for the font or the t-shirts’ graphic design and accordingly, zero legal rights. However, the continuous social media backlash helped Roberts to fight the fast-fashion giant.

After days of being swatted with criticism, Old Navy removed the copy from its official website. Moreover, in an email to Roberts, Old Navy state that no additional orders – for the disputed t-shirt – would be placed. 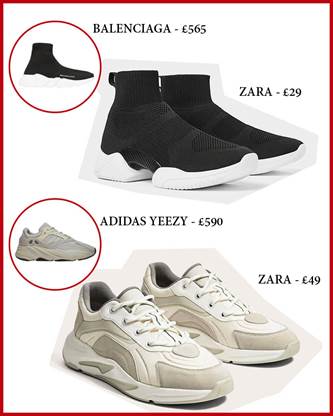 Zara, a Spanish fast-fashion giant has a laundry list of its own. In the past, the company was caught creating copies of Balenciaga sneakers and Kanye West’s coveted Yeezys.

Zara has also ripped off pins from illustrator Tuesday Bassen, and replicated sandals by designer Aurora James of Brother Vellies. Apart from Missguided, the ‘Gap-owned’ Old Navy, and Zara, there are several other fast fashion companies stealing and selling designs. Some of the biggest ones are Forever 21, Boohoo, Fashion Nova, Asos, Pretty Little Thing, and Nasty Gal.

Here’s a quick recap of how these fast fashion brands got caught for stealing in the past:

• Asos is known for copying styles from luxury brands, adding 4,000 new styles to its site, every week!

The fast-fashion business model is a global problem that impacts the environment, people, and animals. Unfortunately, our insatiable appetite for fashion, latest trends, desire to copy celebs and successful ones won’t go away.

Therefore, new business models in fashion, such as circular or slow must be adapted to match consumer needs while preserving resources and protecting the environment. However, for these new business models to become the norm and replace fast fashion, change must start with us; with you and me, consciously pushing for a better world.

This article has not been edited by Fibre2Fashion staff and is re-published with permission from thevou.com