The Bristol based company established in 1971 by Don Cameron manufactures hot-air balloons. Mr Cameron started the company from the basement of his house where he would run production of these bespoke hot-air balloons. In 1983 Cameron Balloons moved into its current premises in the Bedminster area of the city of Bristol. The factory occupies three floors. Most of the factory space (first and second floors) is devoted to laying out the hundreds of yards of brightly coloured fabric to then be cut and sewn together by skilled machinists. In 1989 the company received royal recognition “The Queen’s Award for Export” and in 2000 was awarded “Prince Philip’s Designers Prize for outstanding achievement in design for business and society.”

The company manufactures hot-air balloons in all materials, sizes, shapes, characters and shapes. Most special-shape balloons are made for commercial advertising, but some have been bought privately. Notable amongst these private buyers is the late Malcolm Forbes of Forbes Magazine, who commissioned a dozen or so special-shaped balloons, including a Harley-Davidson motorbike, Sphinx, bust of Beethoven, French Chateau, Pagoda and Minaret. The company also makes airships, helium balloons and static inflatables. It has been involved in national and international record-breaking balloon flight successes including round-the-world duration, altitude and distance world records. 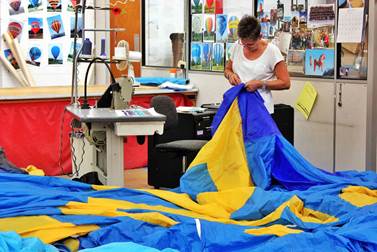 Nick Purvis, sales director at Cameron Balloons said, “Each of our hot-air balloons are built to strict United Kingdom Civil Aviation Authority standards and we have to follow the same strict procedures as any other aviation company.” Cameron Balloons is today one of the world’s favourite manufacturer of hot-air balloons, with over 9,500 supplied worldwide. Purvis added, “The company has grown tremendously. We started off with a handful of employees cutting and stitching balloons by hand. Today, we employ around 50 staff who operate sophisticated machinery for production. We have invested heavily in technology over the years to make our bespoke manufacturing processes efficient.” 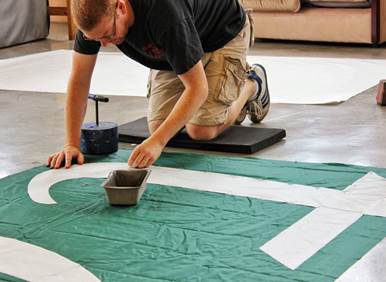 The hot-air balloons are manufactured using a very fine woven nylon usually weighing 35g/m2 to 100g/m2. The lightweight roll of material is usually cut into symmetrical boat-shaped pieces, the many kilometres of which are required to manufacture a balloon are then stitched together by skilled and expert craftspeople. Purvis said, “Each hot-air balloon is manufactured to the customers’ exact requirements with an average lead time of 10-30 weeks depending on the complexity of the balloons’ artwork or shape.” 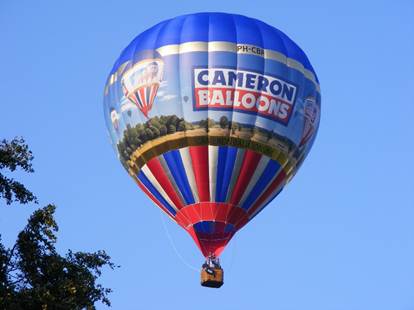 Cameron Balloons have been using Zund digital cutting technology for over 20 years to cut the variety of fabrics which make up each panel. Purvis said, “The majority of the cutting is done on the Zund using the rotary cutting tool. We also find the Zund very beneficial when needing to cut individual artwork or lettering that often form part of any branding on the hot-air balloons.” Cameron Balloons also uses the pen module to mark the different panels, making their Zund a very versatile solution.

This is the company’s third investment, having bought the original Zund P- Series plotter in the early 90s to plot patterns and cut fabric panels. Purvis said, “Our latest purchase was the Zund Digital Cutter G3 L-2500 in 2019. This cutter has completely revolutionised our manufacturing process. When choosing the extras for our Zund, we decided to add the Integrated Compact Colour Camera (ICC camera) to create some sort of automation with our Durst Printer. However, the added benefits have been more than originally anticipated. In the past, the material came off our Durst printer and had to be hand cut before being placed on the Zund Cutter. Now thanks to the ICC camera, the cutter can identify registration marks or board edges and cut accordingly. The Zund technology and the Durst Printer complement each other very well.”

The semi-automated workflow from the Zund and Durst has reduced the workforce by 2 people. The material now comes out of the printer and is fed straight to the cutter. Purvis said, “Since the addition of the Zund Digital Cutter G3 L-2500 with ICC camera, the efficiency and accuracy have been the best it can be. We are now saving around 4 per cent on material usage every year.”