We still have a long way to go
Carry Somers was inspired to act after the Rana Plaza factory collapse in Bangladesh in 2013 and founded Fashion Revolution. For the previous 20 years, Carry's fashion brand Pachacuti had pioneered radical supply chain transparency, mapping the GPS co-ordinates of each stage of the production process, from the community plantations where the straw grows, through to each Panama hat weaver's house. Carry in a conversation with Subir Ghosh.

It's been five years since the Fashion Revolution movement was launched. How do you look at the journey so far? Is five years too less to make an assessment of an impact?

Five years ago, the Rana Plaza factory collapse shook the fashion world, and ignited a Fashion Revolution. Five years of Fashion Revolution means five years of millions of people using their voices and their power to call for greater transparency. And it's working. We are now the world's largest fashion activism movement. We have counted 152 large brands publishing a list of the facilities where their clothes are made. (Brands with a turnover over £36m. Data as of end February 2018).
But we still have a long way to go until everyone who makes our clothes can live and work with dignity, in healthy conditions and without fear of losing their life. Poverty, human rights abuses, lack of union representation, unfair wages, discrimination, environmental pollution, waste and lack of transparency all remain within fashion. In our Garment Worker Diaries project which interviewed 540 garment workers every week over the course of last year, 40 per cent of workers had seen a fire in their factory.
Every day people are risking their lives to make our clothes. In the 2018 Fashion Transparency Index published on April 23 which ranks 150 of the biggest fashion brands and retailers according to how much they disclose about their social and environmental policies, practices and impact, 12 brands scored zero per cent and 48 brands and retailers (32 per cent) are scoring in the bottom 0-10 per cent range. This shows that many brands and retailers are still lagging far behind, disclosing very little about their social and environmental practices. This is why we still need a Fashion Revolution and are planning to make this Fashion Revolution Week bigger and bolder than ever before.

Coming to the impact itself. How have you been tracking the impact of #FashRev? What are the metrics that you have been falling back on?

No, because we haven't used the #FashRev hashtag for the past few years. Our main hashtags are #whomademyclothes and #fashionrevolution, with #imadeyourclothes for the response of brands, retailers and producers. Last April, we saw 533 million impressions of our hashtags on social media. Last year, 3,600 organisations posted photographs with the hashtag #ImadeYourClothes. Over 2.5 million people engaged in the Fashion Revolution campaign last year. 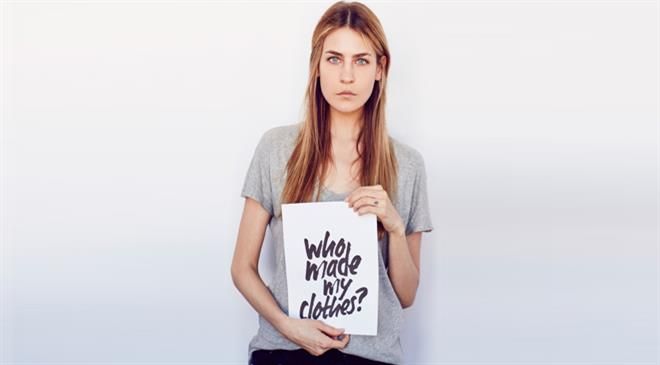 How much do you think the movement has been able to have an impact on the discourse about sustainable fashion itself? Or, say for instance, on the harmful effects of fast fashion (just as an example)?

One of the pegs of the movement has been transparency. How have brands reacted to the Fashion Transparency Index in the year gone by? Have they been trying to improve on their scores? From what I remember not a single brand went beyond the 50 per cent grade.

This year 10 brands achieved more than 50 per cent. Adidas and Reebok were followed by Puma, H&M, Esprit, Banana Republic, Gap, Old Navy, C&A and Marks & Spencer in the 51-60 per cent range of scoring.
The section on transparency is where we have seen the most improvement in transparency since last year's report. Fifty-five of the 150 brands are publishing a list of their 'tier one' factories-in other words, where their clothes are typically cut, sewn and completed. This means 37 per cent of brands and retailers in this report are disclosing who their suppliers are, up from 32 per cent last year (32 brands in total in 2017). This year, 32 of the 150 brands and retailers are publishing over 95 per cent of their 'tier one' suppliers.
A few brands and retailers are going above and beyond the requirements of the Transparency Pledge. Four brands include an email address or phone number for each 'tier one' supplier; these include Converse, Jordan, Nike (all owned by Nike, Inc.) and Lindex. Three brands-Converse, Jordan, Nike (all owned by Nike, Inc)-include the percentage of foreign and migrant workers in each supplier. Although not covered within the scoring of our methodology, we thought it interesting to point out that Marks & Spencer is the only brand/retailer that includes whether each facility on its 'tier one' supplier list has a trade union or workers committee.
Only one brand is publishing where they source raw materials. Ninety per cent of the fibres produced for ASOS products come from major suppliers Lenzing and Aditya Birla with a very small amount sourced from Shangdong Yemi and Nanjing Chemicals. Last year, no brands or retailers were disclosing the source of raw materials.
Published on: 23/04/2018

Famous for having fabric that lasts forever

NFTs are emotions you own

Technical textiles and their applications offer great potential for further...