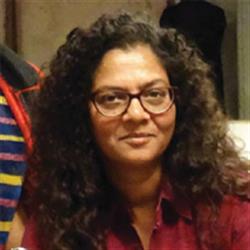 It is the producers who fix the value of their labour
Kumbaya, as a social enterprise, was started by Nivedita Banerji in 1995 to empower women in one of India's most remote and backward regions in Madhya Pradesh. Banerji is a founder of the Samaj Pragati Sahayog-one of India's largest organisations working in natural resource management, livelihoods, microfinance and women's empowerment-of which Kumbaya is a part. She lives and works in a village in Bagli tehsil of Dewas district. In a predominantly agrarian region where there have been no traditional marketable crafts or any history of manufacturing, Kumbaya has created a successful enterprise with its own brand name that has empowered women and the differently-abled with a new skill-the art of stitching-and with employment opportunities. In an interview with N Kalyani, the highly creative Banerji shares the journey of Kumbaya.

What prompted you to set up Kumbaya?

It has been twenty-three years since the day women from Neemkheda village came to our home, and saw patchwork cushions-made out of old clothes-that I had stitched. From the colourful pieces sewn together, they spotted the shirts and kurtas we used to wear. The very next day, building an earthen dam in the scorching sun with headloads of clay, they expressed their desire to learn how to stitch on the sewing machine. Thus began Kumbaya with three borrowed sewing machines, a box full of scrap, and a book on quilting techniques. Located deep in the tribal drylands of Bagli tehsil in the Dewas district of Madhya Pradesh, Kumbaya has worked to empower women from one of the most deprived areas of the country by creating livelihoods through the dynamic skill of garment fabrication.

Kumbaya was about creating an economic enterprise that works for poor tribal women. It meant charting a course in unknown terrain. It involved teaching women who were used to carrying loads and putting their bodies through gruelling labour, who were on the move all day, going from their homes to the fields and the forest, to sit still and to stitch. It entailed building worksheds and installing generators, as also finding fabric and fixing prices. In short, it meant learning and more learning about everything.
Within the first two years, the women saw phenomenal success, earning almost ₹100 a day back then, at a time when the agricultural wages for women were just ₹14, even as their products sold on Rodeo Drive in Hollywood. The challenge in the initial years for Kumbaya was to survive in the face of violent opposition, on behalf of hesitant, vulnerable and "unviable" participants. Employment had to be created all year round for poor women who face disinheritance, displacement, drought, debt and migration in an area with a history of exploitation and discrimination. Today, Kumbaya has become a brand name for machine-stitched ready-to-wear garments, patchwork home linen and accessories designed to market specifications and international trends with retails available at several stores across the country. Over the past twenty-three years, more than 1,400 women in 100 villages have learned stitching. 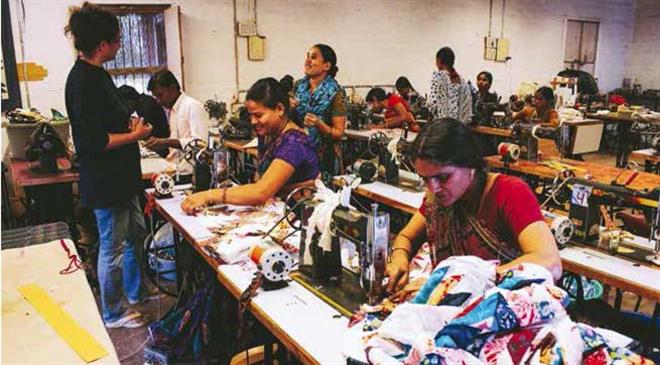 What is the philosophy behind Kumbaya?

Kumbaya seeks to transform and strengthen women's lives through the power of design. It is a social venture bringing women together to learn a skill and earn their way out of poverty. For an economic enterprise that works for women, the imperative is to find contemporary, competitive and professional solutions that equip women to participate in the market. The heart of Kumbaya is the producer. Each person in charge of any activity in the entire cycle of design, sampling, production, marketing, and sales is intensely aware of the imperative of being accountable to the well-being of the producer. Kumbaya is also deeply committed to differently-abled women and men whose inability to contribute manual labour in a primarily agricultural area leads to their marginalisation and abandonment. Our most rewarding contribution has been in including them as skilled producers and high earners.

How is the training of potential and established producers conducted?

Kumbaya continuously invests in teaching the art of stitching, and guaranteeing employment 300 days a year, particularly for the marginalised, especially poor women, and the differently abled so they are self-reliant and can live a life of dignity. The art of stitching promotes dignity and joy in being skilled, a connection with the creation, accountability, independence, and equality, leading to a sense of ownership. Teaching the art requires setting aside resources for trainers, equipment, and raw material so that even someone who has never held a pair of scissors can become competent at garment manufacture according to market specifications. Upgrading the skills of existing producers to meet the challenge of ever-changing designs in the business is also needed. Beginning with one centre in a small village, Kumbaya now runs four centres because of the demand from self-help group (SHG) members in different locations of Samaj Pragati Sahayog's area of work. Apart from the producers who work regularly with Kumbaya, hundreds of those trained here stitch from home.
Inspired by Kumbaya, new independent centres are also coming up in certain locations at the initiative of the women. If these are successful, they will scale up Kumbaya's production and respond to the economic needs of many more women of the area. To build the capacities of producers requires investing in a team of dedicated, highly skilled local trainers and supervisors who can then manage the Kumbaya centres, supervising everything from training, sample and pattern-making, production, sourcing, marketing, customer relations and accounting. Investing in a local cadre consolidates the growth and sustainability of the enterprise. 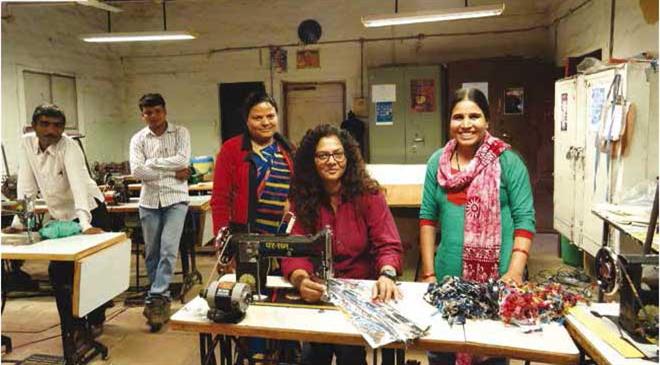 Do the producers use only sewing machines? Is there any hand embroidery also?

Kumbaya focuses on stitching on the sewing machine. The simple sewing machine is one of the most affordable and transferable technologies available for rural women. Whether it is for women working from home or in an organised unit, it ensures production and an immediate rate of return from very low investment. The sewing machine has immense capacity for upgradation and easy upscaling. Industrial sewing machines can run with or without power. They are durable, have readily available standard spare parts, and their maintenance is low cost. The sewing machine can deliver an unlimited product range and output, the flexibility of functions making it viable for starting ventures in rural areas. With a simple change of needle and thread it can work on a variety of materials from chiffon and silk to leather and canvas, and create a range of products from garments to bags and quilts. No other technology has this kind of versatility. Over the last few years, we have also introduced ari and godri embroidery forms because these are local skills practised by some women in our area. We are helping them refine their skills under the guidance of master craftsmen.
Published on: 07/12/2018

Awarded more than 31,000 certificates & labels in past financial year

Our partnerships with African governments have been particularly fruitful

On a mission to normalise reusable nappies

Innovation with sustainability a driving factor