A policy of attraction
The Uttar Pradesh government, ahead of the Investors Summit 2018 to be held in Lucknow from February 21-22, carried out a series of policy promotion roadshows to attract investors. It has recently launched a textiles policy providing incentives including a ₹3,200 wage subsidy and 25 per cent capital subsidy, among others. Mukul Singhal, Additional Chief Secretary, Departments of Handlooms, Textiles & Sericulture, spoke to Hiral Oza at the Ahmedabad roadshow about the highlights of UP's textiles policy and steps taken to make headway in the sector.

The focus of the new textiles policy for Uttar Pradesh is on apparel manufacturing as it generates employment. How does the policy propose to meet the raw material requirements?

The new UP policy has emphasis on garmenting because that creates jobs, and that is where the final retail happens, which is the final product. But this policy integrates all aspects of textiles. The basic difference between this policy and the previous one is that this covers the whole gamut of textiles. It even covers leather accessories and leather garmenting along with jute, silk, spinning, weaving, handlooms and fashion accessories. 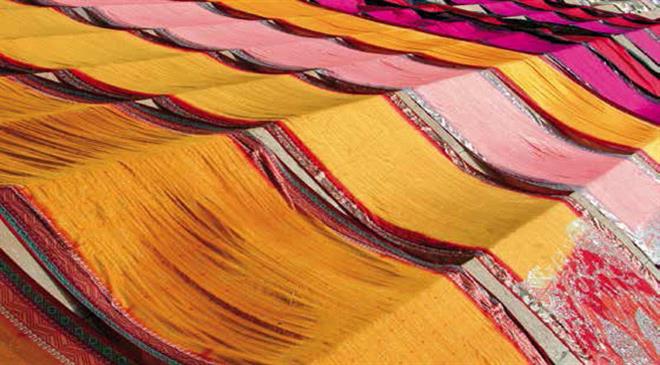 How much employment are you expecting to generate and in what timeframe? What percentage of this is expected to go to women?

We are looking at a modest figure of one lakh new people being employed. We would like that to happen in three years, but the horizon officially is five years. I am hopeful that we will be able to do that in three years. A very large portion is expected to go to women; however, we are not targeting women's employment specifically. Our policy has special incentives if more than 75 per cent women are employed. The normal belief is that textiles is a sector where women participate in a big way.

The power tariffs in the state are high. Do you plan to harness the state's abundant solar energy?

Oh yes! We have big plans to harness solar power. The strategy laid out in the policy is that there will be no electricity duty for the next 10 years. We will also liberally permit open access. The bigger focus for us is on harnessing solar power especially in regions like Bundelkhand near Jhansi and Lalitpur, where land is available in plenty and agriculture is not easy. We have a lot of land which will be used for solar power. There are serious efforts being taken to reduce tariffs using solar energy in regions where there is plenty of electricity. So, we are hopeful of providing a competitive electricity rate in the near future.

How many super mega and mega textile projects are expected to come up under the policy?

I would love it to be in hundreds. But being practical, I would be happy if we get 30-40 parks or 30-40 mega units. Parks are a different ballgame. The policy allows parks of a minimum size of 25 acres, which is very lucrative. If we can get 5-10 in the next two years, we would have begun well.

What is the focus on? Is it more on traditional handlooms and Banarasi weaves, or the new and evolving technical textiles?

We don't have raw materials for textiles in UP; we have labour and we have the market. The policy covers all areas of textiles. We don't want to limit our focus right away. We want to first look at what happens, and how people react. We would like to provide special incentives in terms of ease of doing business to specific sectors. So far, we have left it to the investors. But we are open to a very healthy debate on this. For super mega units, the incentives can be customised, but when we talk of special incentives, by and large we mean only financial incentives. There are other kinds of incentives, for example, if somebody is building a big industry or factory where they employ more than 20,000 people, then the state government will try and provide infrastructure like road and power connectivity. These are the things we are very much open to, and we would positively look at any large companies that require this sort of investment.

How would you describe the connectivity in the state?

We are offering an employment generation subsidy of ₹3,200 per worker for five years for super mega and mega units. This is one part, but the bigger part is the requirement of connectivity. Today, from Delhi to Gorakhpur, which is at the other end of UP, that borders Bihar, one can drive in 9-9.5 hours. That's the kind of road connectivity we provide. Between Delhi and Lucknow, the drive that used to take 11-12 hours, now just takes 5-6 hours. The state government has massive plans to connect eastern UP by the Poorvanchal expressway, which will go from Lucknow to Varanasi and Ghazipur. There is also a plan to build an expressway to Bundelkhand. Once this happens, we will have excellent road connectivity. Train connectivity is very good already. We are fortunate that both the eastern and western dedicated freight corridors have a junction point in UP. On the eastern dedicated freight corridor, half of the total length of the corridor lies in UP. Air connectivity is also good, if you look at the flights going to Varanasi every day; it's amazing. Lucknow, Varanasi, Agra, Gorakhpur are all well connected by air. The regional connectivity, for which formalities are already made, is also improving. It is going to connect almost all the divisional headquarters with Lucknow. It's clear that there is a lot of emphasis on connectivity. One big achievement in the last few months has been 20 hours of continuous power supply, which we plan to improve to 24 hours within a year. Hence, power and road are taken care of. Besides that, internet and telephone connectivity are good.
There's barely a place from where you cannot make a call or send e-mails from. There's a lot of focus on law and order by this government. There is an overall improvement in facilities. In all the roadshows we have been to so far, we have received positive responses. One is hopeful. Optimism is necessary.
Published on: 14/02/2018

The country lacks the kind of scale to successfully compete with the larger...

We encourage weavers to be designers

FR and safety apparel will continue to be a strong area of growth.

Products for dye sublimation are the most in demand right now

High R&D expenditure is no assurance for success