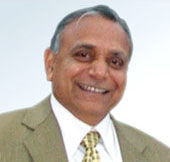 Prashant Group has made itself synonymous to weaving solutions in Indian textile machinery arena. Please narrate your stance on major developments, bottlenecks, key to success in this sector.

Textile industry occupies a significant position in Indian economy. Present market size of Indian textile industry is around US $ 57billion, of which 56% is domestic and around 44% is exports. Overall, it contributes 4% to India’s GDP and about 14% to the industrial production. It is the second largest employment generating industry.

Weaving is one of the major activities. Weaving industry depends on many factors. Some of them are: overall economic condition, raw material price, govt. policies, currency fluctuation and economic condition in Europe and U.S, both being major clientele nations.

Since last 10 years, Indian weaving industry has been through many ups and downs. After 2003, there was very huge demand of good weaving preparatory and govt. also supported the industry through various schemes like TUFS and 20% CLCS.  The global recession in year 2007-2008 led to deep crisis in 2008 for Indian weaving industry.

Indian industry recovered after the crisis and weaving sector grew at the rate of 15-20% in 2009 -2010. The govt. also re-started TUF scheme in 2011 which was halted in 2010. The subsidy reimbursed after restarting the TUFS was around Rs. 1972 crore. These factors definitely gave boost to the market but global slowdown has again clutched down its pace.

As far as today’s scenario is concerned, Ministry of Textiles has put the proposal for extension of TUFS in 12th five year plan. They have also put the proposal of removing excise from readymade garments.  The scenario will be clear by March/April, once central government approves or rejects the proposal.

Today, technical textile is a rapidly growing segment. It is expected to grow at 6-8% per annum till 2020. The govt. is trying to promote this industry with specialized schemes.

Global condition definitely affects the scenario, but India can overcome these crisis encashing domestic opportunities as India is the second largest textile economy in the world after China.

To illustrate my point let us consider- Sizing, which is an equally important factor for single count cotton fiber and there has been acute shortage of good quality sizing and warping machine in the Indian industry. So grabbing the opportunity, we have tied up with West Point- a USA company, and offer various products in this line too.

In technical textiles, especially in geotextiles segment, we see lucrative market and have come up with specialized warping machines.

In decentralized segment too, we observe people have started realizing the importance of modernizing. They have understood the value of good preparatory. So we introduced different models of sectional warping and sizing machines which can cater to this segment.

‘Generally speaking, it is difficult to measure the degree of consumers’...

‘As we say in IKEA, one needs textiles to turn a house into a home’

Can you please draw an overall picture on world RMG market and latest moves in...

‘Sustainable fashion is trending upwards, slowly but surely, as people look to...

How much are textile makers keen to spend on software? What are the future...

How do you see denim market shaping around the globe? How will Indian denim...