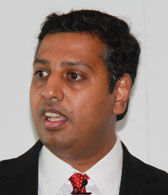 How do customers react normally in cases of contaminated cotton yarn in cotton garments? How to prevent contamination in yarn? Geographically, cotton contamination is noticed the most in which areas?

We hear about contamination claims from yarn buyers or users all the time. Often spinners are asked to take back the entire lot or to agree to compensation for losses. When these things happen it is damaging economically but more importantly it affects market reputation and further business. Another undiscussed cost is the cost of mending these defects in the fabric. The more they are the more the costs. Just recently, a very highly respected spinner met me at an exhibition and was keen on reducing the amount of polypropylene (PP) contamination because they got a complaint of many small PP defects remaining in dark knitted T-shirts. They had to divert the lot to other applications and had to compensate the yarn user.

The idea of USTER's Total Contamination Control is to have an approach that is more practical and comprehensive so that one can achieve the acceptable remaining contamination and the lowest possible cost.  We think that doing it only at winding using yarn clearers or in the blow room using fiber cleaning systems are both not enough on their own because there are limitations at both ends. One needs to combine the capabilities in both stages - the USTER® QUANTUM 3 and the USTER® JOSSI VISION SHIELD - to limit the amount of contamination in an efficient way. It also would include optimizing the sourcing of cotton based on contamination levels as well. In effect if you buy less contaminated cotton, filter the maximum in blow room then foreign fiber fragmentation in the process is reduced resulting in less contamination to be managed at winding.

One can refer to the regular ITMF reports on contamination to get an idea about contamination levels in different areas. One general statement that can be made is that manual harvesting and handling generally seems to result in higher contamination levels. At the same time I can say that the awareness of contamination has dramatically improved among farmers and ginners, and that has resulted in concerted efforts to reduce the contamination level at the origin even in such cases. Further the availability of real data has also helped to a considerable degree. Overall one can say that we are heading in the right direction but there is some distance to cover.

How do you see the denim wear market faring globally and in India? What are the ...

Nitol Niloy Group- such a diversified firm is entering into market of Denim. Is ...

How do you see the purchasing confidence of apparel makers as well as how much...