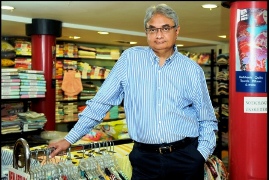 Mr. Rahul Mehta
India’s garment exports are likely to increase to US$ 17 billion this fiscal, compared to US$ 14 billion exports made during 2012-13, according to Clothing Manufacturers’ Association of India (CMAI).
Speaking at a press conference to announce the National Garment Fair that is to be held from July 1, CMAI president Rahul Mehta said India will be able to achieve apparel export worth US$ 17 billion this fiscal year.
In the first two months of financial year 2013-14, India exported apparel worth US$ 2.3 billion, registering a 15 percent growth compared to US$ 2 billion exports made during the corresponding period of last fiscal.
Mr. Mehta said India’s apparel industry has showing positive growth, after a year of stagnation, mainly on account of the imposition of the 10 percent excise duty last year.
The recent depreciation of the Indian rupee vis-à-vis other currencies, the happenings in Bangladesh, and high production cost in China are factors favouring Indian garment exporters.
In recent years, Indian garment exporters have shifted their focus to non-traditional markets in Latin America and other regions, which also favours a boost in exports.
However, rising cotton and yarn prices and lack of availability of skilled labour are among the problems currently faced by the Indian garment industry, Mr. Mehta said.
India’s clothing industry is targeting a growth of six to seven percent this year, and 10-12 percent next year, he added.
The rising demand for readymade garments in Tier-II and Tier-III cities is one of the reasons that will drive India’s garment industry.
India’s domestic apparel market is estimated at Rs. 2,000 billion, with the unorganized sector accounting for more than half of the market. With the removal of the excise duty coupled with a growing demand for branded garments, India’s apparel industry is expecting to grow to Rs. 4,000 billion by 2018.
Separately, CMAI has launched a quarterly domestic apparel index to gauge the progress of the industry. The index aims to capture the growth, investment and future plans of the top 50 brands.
At present, the index is 118, which means the garment industry is 18 percent optimistic on future growth prospects.