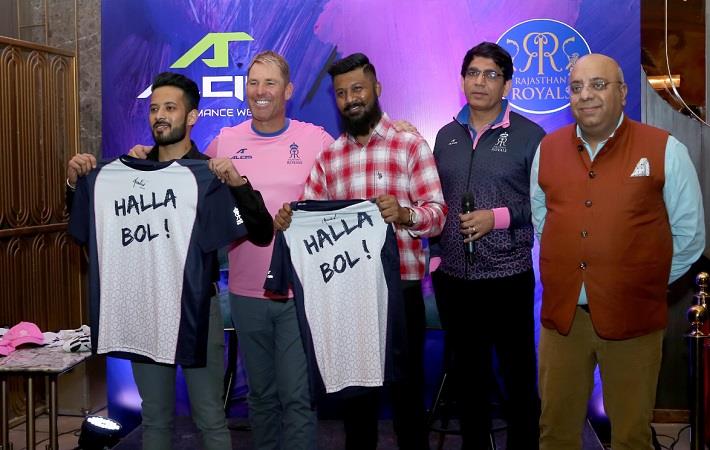 Pic; Alcis Sports
Rajasthan Royals, a cricket team in the Indian Premier League (IPL), has partnered with Indian sportswear brand Alcis Sports as the official multi-year kitting and merchandise partner. This announcement was made soon after the biggest revelation of the season where Royals announced Pink as their official colour which was created with Alcis Sports.

The apparel range for Rajasthan Royals players consists of match jerseys, training wear, gym wear and everyday wear; and features some of the most advanced garment technology. Stylish, easy and comfortable to wear, they are equipped with features such as Dry-Tech — which doesn’t hold sweat and moisture for long, and are made with anti-microbial, anti-odour and anti-static finishes, Alcis Sports said in a press release.

Besides doing the player kitting for the season, Alcis Sports has also launched an exclusive athleisure line by the name of ‘The Royals Collection by Alcis’. The new range has been launched by Rajasthan Royals' brand ambassador Shane Warne. The newly launched line encompasses sportswear as well as daily wear for men, women and kids.  This line includes match jersey inspired fanwear and athleisure, which will be a mix of playing jerseys, practice jerseys, polos, tees, tracktops, trackpants, shorts, leggings and caps across adults aged 13-45 years as well as kids aged 7-12 years, at an affordable price.

Alcis Sports is the first Indian brand to have the capability and production ability to manufacture technologically advanced sportswear to enhance the performance of the wearer, bringing the best of style, comfort and cost; backed by great innovation and technology.

The idea that gave rise to the collection was Rajasthan Royals’ belief in innovation, especially for its fans who are inclined towards health and fitness. The line is targeted towards people interested in running, training, fitness and healthy living. The collection also consists of everyday wear that highlights its novelty. The fabric used for the collection is majorly polyester, lycra and polycotton, the release added.

"We are delighted to welcome Alcis Sports to the Royals family as our official Kitting & Merchandise Partner. This collaboration marks a beginning of a new journey to strengthen the merchandising arm of the Rajasthan Royals, not just for its players but also its valuable fans," Ranjit Barthakur, executive chairman, Rajasthan Royals said.

"Alcis brings in a dash of freshness to the Rajasthan Royals brand and stands for everything that clearly defines the attributes of our brand; young, styled with innovation, aspirational and consistent. We are very excited about this association and hope to have an exciting journey with Alcis this IPL," Royals brand ambassador Shane Warne said.

"We are really happy to be associated with Rajasthan Royals, which has consistently been one of the most exciting teams of the Indian Premier League. We will be providing kits to the Rajasthan Royals team as well as creating merchandise for its fans which will bring greater connect between the team and its fans. We pride ourselves on being a high-quality performance wear brand and the entire Rajasthan Royals range is equipped with the latest features and technologies that garment manufacturing has to offer," Roshan Baid, managing director, Alcis Sports, said.

Rajasthan Royals, a cricket team in the Indian Premier League (IPL), has partnered with Indian sportswear brand Alcis Sports as the official multi-year kitting and merchandise partner. This announcement was made soon after the biggest revelation of the season where Royals announced Pink as their official colour which was created with Alcis Sports.
More Apparel/Garments News - India...