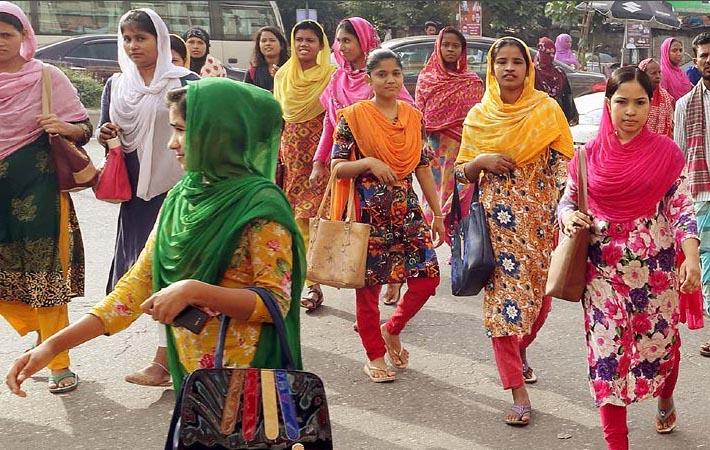 Pic: Oxfam
An in-depth analysis of lives of workers working in the Australian clothing supply chains has revealed a systemic failure to ensure payment of living wages to workers in two sourcing countries – Bangladesh and Vietnam. Only a strong, system-wide commitment from Australian brands and Government can address the issues of the workers, the research reveals.

The study conducted by Oxfam, together with the Bangladesh Institute for Labour Studies and the Institute for Workers and Trade Unions in Vietnam, aimed to present a clear picture of the lives of the people who work to bring fashion to Australian shelves. More than 470 workers across Bangladesh and Vietnam were interviewed for the study. The investigation also included more than 130 interviews with factory owners, managers, union leaders and focus groups.

The report has suggested many corrective actions which the Australian brands and the Australian Government should undertake in order to safeguard workers interests.

An in-depth analysis of lives of workers working in the Australian clothing supply chains has revealed a systemic failure to ensure payment of living wages to workers in two sourcing countries – Bangladesh and Vietnam. Only a strong, system-wide commitment from Australian brands and Government can address the issues of the workers, the research reveals#

For the brands, first and foremost, they should get the basics right in human rights compliance. For this they must be transparent — publicly disclose their factory list and update it regularly. They should fairly deal with human rights abuses by supporting factories to establish effective grievance mechanisms. They should allow workers to organise, consult with unions and workers’ representatives to ensure that workers are able to have a representative say in their working conditions in all factories and are a meaningful part of all wage negotiations and lastly empower women workers by adopting a positive and proactive gender policy.

Secondly, brands should work towards implementation of the living wages in the company supply chain. This must include a timeframe by which a brand will achieve key milestones, such as publishing a living wage roadmap or undertaking a living wage pilot programme.  Brands should recognise that purchasing practices and pricing policies have an impact on wages and working conditions and commit time and resources to calculate the labour costs of merchandise to ensure that prices facilitate payment of a living wage at the very least.

Recommendations for the Australian Government from the report include development and implementation of a national action plan on business and human rights based on the United Nations Guiding Principles on Business and Human Rights. The national action plan should set an agenda for the Australian Government to ensure it is protecting against human rights abuses by Australian companies operating domestically and overseas and investing in education and collaboration with businesses to help them meet human rights obligations — including paying living wages.

Secondly, the Government should introduce legislation that would require large companies to report on the way they deal with human rights risks including the risk that they are not paying living wages in their supply chains. This should include companies showing how they identify human rights risks, and how they act to prevent or mitigate those risks and provide remedy when human rights abuses are uncovered. Penalties should also be put in place for companies that refuse to report, or do not effectively remedy any situations of rights abuse in their supply chains. It also should be strengthened through the introduction of penalties for non-compliance and the appointment of a fully resourced, independent anti-slavery commissioner.

Thirdly, the Australian Government should invest in educating companies about their human rights responsibilities and the risk they have infringing on people’s rights including by paying and allowing poverty wages in their supply chains.

Lastly, the Australian Government should invest in global solutions to poverty wages by prioritising discussion on global labour rights standards in regional and international forums, and by supporting collaborative initiatives that encourage all stakeholders to address poverty wages in developing countries through the Australian aid programme.

Apparel/Garments
US imports babywear worth $255.955 mn in July 2022
1 min read
Interviews
View All