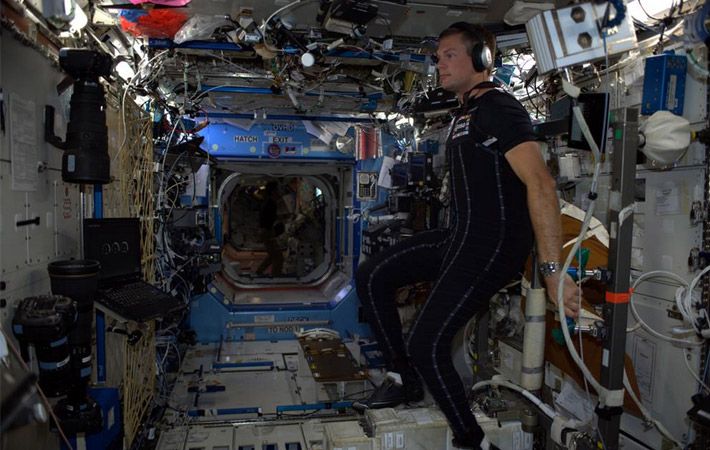 Courtesy: RMIT/European Space Agency
The brainchild of aerospace engineer, RMIT alumnus and senior research associate Dr James Waldie, the SkinSuit has been worn by an astronaut inside the International Space Station (ISS) for the first time.

Australia's RMIT University said Denmark's first astronaut, Andreas Mogensen, spent 10 days in the ISS last month and pulled on the SkinSuit to test its effectiveness in the weightless conditions.

Inspired by the striking bodysuit worn by Cathy Freeman at the 2000 Sydney Olympics, Waldie and his collaborators have spent more than 15 years getting the suit into space.

“Seeing live video of Andreas wearing SkinSuit on board the ISS was thrilling - I felt an enormous sense of achievement that my concept was finally in orbit,” Waldie said.

Skin-tight and made of bi-directional elastics, SkinSuit has been designed to mimic the impact of gravity on the body to reduce the debilitating physical effects space flights have on astronauts' bodies.

In the weightless conditions in space, astronauts can lose up to 2 per cent bone mass per month. Their spines can also stretch by up to 7cms, with most suffering mild to debilitating pain. Following flight, astronauts have four times the risk of herniated discs as the general population.

It was while watching the Sydney Olympics, and seeing Freeman in her distinctive, skin-tight running suit that Waldie first wondered if such an outfit could help mimic the conditions on the ground for astronauts in orbit.

“Given the impact of atrophy on astronauts in space, I wondered if a suit like the one worn by Freeman could fool the body into thinking it was on the ground rather than in space, and therefore stay healthy,” he said.

The special design of the suit means it can impose a gradual increase in vertical load from the wearer's shoulders to their feet, simulating the loading regime normally imposed by bodyweight standing on earth.

For the ISS flight, the European Space Agency wanted to explore if the suit could counteract the effects of spaceflight on the spine.

“This should help with pain in-flight, and the chances of slipped discs post-flight.”

SkinSuit has been developed in collaboration with scientists from the Massachusetts Institute of Technology, Kings College London and the European Space Agency. The suit was manufactured by Italian firm Dainese, best known for producing motorbike leathers for racing.

He took frequent height measurements, comfort and mobility surveys, skin swabs for hygiene assessments, and also exercised with the suit on the Station's bicycle ergometer.

Mogensen has since returned to Earth but is yet to publicly report his findings as he undergoes extensive de-briefing. (SH)