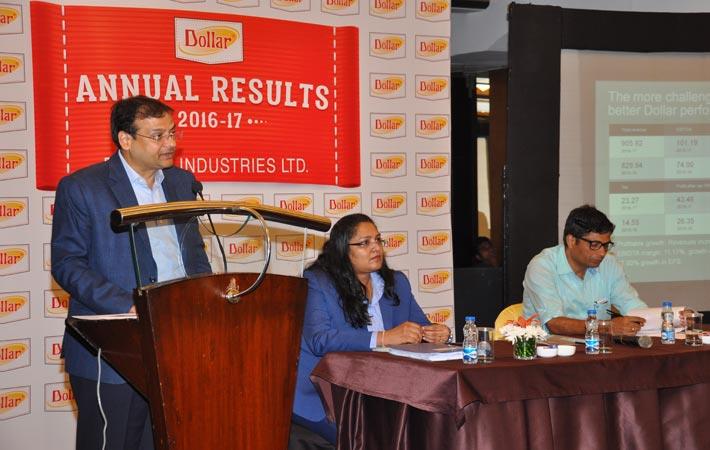 Courtesy: Dollar Industries
Hosiery major Dollar Industries Limited registered a turnover of Rs 906 crore for the FY 2016-17 as against Rs 830 crore during the previous year of FY 2015-16, as per the audited financial result, recording a revenue growth of 9.15 per cent. Revenue for Q4 FY17 was Rs 282 crore, witnessing a growth of 23.24 per cent as against Rs 229 crore for Q4 FY16.

Profit After Tax (PAT) grew by 64.95 per cent to Rs 43.46 crore during fiscal 2017. Earnings Before Interest, Taxes, Depreciation and Amortisation (EBIDTA) also witnessed a growth of 36.74 per cent standing at Rs 101.19 crore. The export revenue of the company stood at Rs 72.24 crore. To boost its growth further, the company is eyeing for substantial number of EBOs across major cities of India by the end of 2020 which would be operated by a franchise model.

"FY 2016-17 was the most challenging year for the hosiery industry due to demonetisation followed by escalating cotton prices across the world. But we have been able to record a higher growth in operating profit than the industry standards. It has been a satisfying year for us at Dollar Industries with the brand making inroads in newer territories and also consolidating its position in the existing hosiery markets in India and abroad," said Vinod Gupta, managing director, Dollar Industries Limited.

"We are committed to maintain the topline growth of the company 15-20 per cent YOY. We are making efforts to improve EBITDA and PAT margins and aiming to achieve 15 per cent EBITA in next three years. We have achieved market penetration of 88 per cent across India which is a result of the team’s aggressive marketing and advertising strategy backed by superior product range, technology upgradation and capacity expansion," added Gupta.

"The company is going to be asset light. Moreover, we would be increasing our presence across India with special emphasis on consolidating the existing market. Our new diversifications in terms of products will see a nationwide rollout. We have received encouraging responses in the online platform both in terms of visibility and e-commerce. We will push the e-commerce sales up to the maximum percentage in our total turnover. Moreover ‘super premium category’ will be the prime focus for Dollar Industries Ltd in the coming days”, added Gupta.