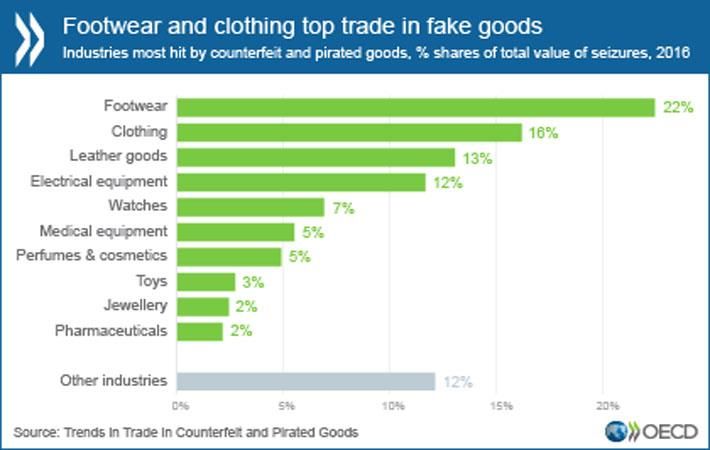 Pic: OECD
Trade in counterfeit and pirated goods has risen steadily in the last few years and now is 3.3 per cent of global trade even as overall trade volumes stagnated, according to a new report. The fake goods making up the biggest share of 2016 seizures were footwear, clothing, leather goods, electrical equipment, watches, perfumes, jewellery and pharmaceuticals.

The majority of fake goods picked up in customs checks originate in mainland China and Hong Kong. Other major points of origin include the United Arab Emirates, Turkey, Singapore, Thailand and India, said the report by the Organisation for Economic Cooperation and Development (OECD) and the European Union’s Intellectual Property Office (EUIPO).
Trade in counterfeit and pirated goods has risen steadily in the last few years and now is 3.3 per cent of global trade even as overall trade volumes stagnated, according to a new report. The fake goods making up the biggest share of 2016 seizures were footwear, clothing, leather goods, electrical equipment, watches, perfumes, jewellery and pharmaceuticals.#

Titled ‘Trends in Trade in Counterfeit and Pirated Goods’, the report puts the value of imported fake goods worldwide based on 2016 customs seizure data at $509 billion, up from $461 billion in 2013 (2.5 per cent of world trade).

For the EU, counterfeit trade represented 6.8 per cent of imports from non-EU countries, up from 5 per cent in 2013. These figures do not include domestically produced and consumed fake goods, or pirated products being distributed via the Internet, according to an OECD press release.

The countries most affected by counterfeiting in 2016 were the United States, whose brands or patents were concerned by 24 per cent of the fake products seized, followed by France at 17 per cent, Italy (15 per cent), Switzerland (11 per cent) and Germany (9 per cent).

A growing number of businesses in Singapore, Hong Kong and emerging economies like Brazil and China are also becoming targets.

Small parcels sent by post or express courier are a prime and growing conduit for counterfeit goods. Small parcels accounted for 69 per cent of total customs seizures by volume over 2014-2016 (57 per cent via post and 12 per cent via courier), up from 63 per cent over the 2011-2013 period.

Past OECD-EUIPO analysis has shown that free trade zones –where economic activity is driven by reduced taxes, customs controls and lighter regulation–can unintentionally facilitate counterfeit trade. The OECD is working with its member countries on formal guidelines to help authorities stem the problem. (DS)

Georg Dieners
Oeko-Tex
Awarded more than 31,000 certificates & labels in past...

Gurudas Aras
Former Director at A.T.E Group
Denim will always remain in vogue
Annabelle Georgina Hutter
Säntis Textiles
We source fibres, yarns and fabrics in Asia
Virginia Zingone
Italian Kids Brands
Everything is imported from Italy
Folker Stachetzki
Brother Internationale Industriemaschinen GmbH
We always use FESPA to showcase our latest developments
Somya Goyal
Label - Somya Goyal
Our creations can be styled throughout the year and worn...
Piero Cividini
Brand - Cividini
Handmade, made with the technology of the hands
Sujata & Taniya Biswas
Suta
Our aim by 2030 is to work with at least 2 lakhs weavers