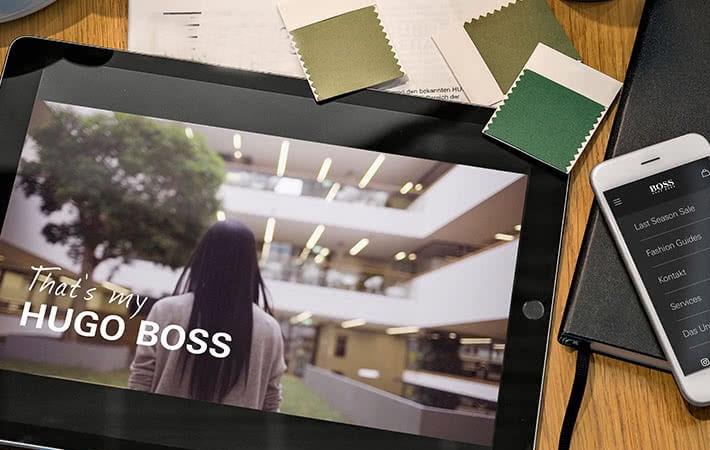 Pic: Hugo Boss
In Q2, Hugo Boss increased currency-adjusted sales by 2 per cent to €675 million. Group-wide retail sales increased 3 per cent in total and 2 per cent on comp store basis representing seventh consecutive quarter of double-digit growth. Online business grew by 16 per cent while wholesale business was stable with sales in Europe and APAC above prior year level.

Sales performance in APAC was once again particularly strong where currency-adjusted sales growth accelerated to 8 per cent. In China, Hugo Boss achieved double-digit comp store sales growth. In Europe, sales increases in UK and France offset a decline in Germany. Overall, currency-adjusted sales in Europe were up 2 per cent. Due to the persistently difficult market environment in the US, sales were down 3 per cent on the prior year. In particular, an easing of the positive effects of the tax reform, a weaker business with tourists and a highly promotional market environment in general weighed on sales performance.

“In an ongoing challenging market environment, we have increased both our sales and operating profit in the second quarter,” said Mark Langer, chief executive officer of Hugo Boss AG. “For the second half of the year, we are now expecting a significant acceleration in sales and operating profit development. This will make a decisive contribution to the achievement of our full-year targets. Key drivers will be our partnerships in the online business and the ongoing optimization of our store network.”

On the basis of the half-year results, Hugo Boss confirmed its outlook for the full year 2019. The management now expects sales and earnings to reach lower end of the existing outlook. In doing so, Hugo Boss took into account the persisting challenges in US market in particular. The acceleration in sales in the second half of the year will be driven by its own retail business, which is forecast to achieve currency-adjusted sales growth in the mid to high single-digit percentage range in full year 2019. In addition to acceleration in comp store sales growth, the company expects further growth stimuli for the second half of the year from intensified online partnerships under the concession model and from the ongoing optimisation of its store network.

In the second quarter, the company has continued to make good progress in executing its strategic priorities. With the introduction of 'Boss Made for Me' the company has further expanded its personalised product offering. Customers can use this service to freely combine outer materials, lining and buttons on their new Boss suit, thereby tailoring it individually to their preferences. The face of the accompanying campaign is the professional soccer player Mats Hummels. 'Boss Made for Me' is already offered in selected Boss stores in Europe, including London, Paris and Munich. This service will be successively expanded in the coming months.

The renovation of strategically important Boss stores is also progressing according to plan. In the second quarter, eight stores were reopened under the new store concept, including stores in Stockholm, Tokyo and Macau. Customers now have the opportunity to experience the Boss collections in this new environment in more than 40 major cities. For the Hugo brand, three additional stores with a unique furniture concept opened in the same period in Tokyo, Singapore and Moscow. Today there are 26 Hugo stores globally presenting the brand to customers.

At the Berlin Fashion Week in early July, Hugo presented a jointly developed capsule collection together with the British singer and artist Liam Payne. The new styles were showcased digitally at an event in Berlin with a live appearance from Liam Payne, after which they were immediately made available online – exclusively on Instagram initially, then via its website and in selected Hugo stores. As the global brand ambassador for Hugo, Liam Payne will continue to support important marketing campaigns and exclusive collections in the coming months. This is the first partnership of its kind for Hugo. Liam Payne is expected to raise the brand’s profile globally and play a key role in further increasing Hugo’s relevance in the dynamic contemporary fashion segment.

In addition, the partnership recently entered into with the Taiwanese-Canadian actor Mark Chao is intended to further increase desirability of the Boss brand in Asia. In an initial step, a jointly developed capsule collection was launched on the Chinese market in April under the title 'Luxury Travel'. The response to the styles available in selected Boss stores, its website and a WeChat Mini Programme was extremely positive. In his role as regional brand ambassador, Mark Chao will continue as the face of important marketing campaigns. (PC)