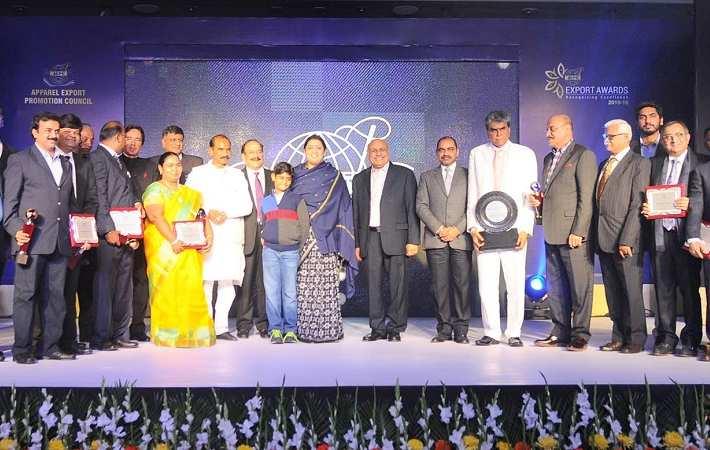 Smriti Irani with the recipients of the AEPC Export Awards. Courtesy: PIB
The textile industry should head towards sustainable garments from an international perspective and should look for innovation either in marketing or technology, said Union textiles minister Smriti Irani. She also said that the government has helped open over 5 lakh bank accounts for associated workers in the sector in three weeks following demonetisation.

The government is also ensuring that the workers are trained to digitally use their bank accounts, said Irani at the Apparel Export Promotion Council (AEPC) Export Awards held in Delhi to recognise outstanding export performance in the year 2015-16. The government is also open to assist AEPC in opening new bank accounts for workers in the textile export sector, according to Irani.

She also suggested that there should be awards for the best players in emerging markets and sustainable production in the next award season. Innovation is another area that Irani feels should be encouraged during the next season. Irani encouraged AEPC and garment exporters to be a partner in the government's efforts towards job creation through value driven manufacturing and exports.

The minister presented the awards that were divided into multiple categories. Shahi Exports, Orient Craft and Gokaldas Exports won awards in the ‘global exports above Rs 500 crore’ category, while Pearl Global Industries, Pratibha and Raymond Group of Companies received the awards in the ‘global exports between Rs 100 crore and Rs 500 crore’ category.

Penguin Apparels, Jyoti Apparels and Loyal Textile Mills bagged awards in the ‘global exports between Rs 50 crore and Rs 100 crore’ category. Million Exports was recognised as the new entrepreneur in the industry, while Lodha Impex received an award for the highest exports to Japan.

“AEPC Export awards extend across diverse categories and include both experienced and start-up representations. The awards have been instituted with the aim to encourage Indian apparel exporters to increase their export capacities and enhance competitiveness amongst firms to capture the global markets,” said Ashok G Rajani, chairman, AEPC.

India’s garment exports had been facing problem of stagnation since last year, due to depressed market conditions in the major markets like the US and EU. However, since the announcement of the Rs 6,000 crore special package by the ministry, there has been optimism in the industry and exports have picked up, said Rajani.

Garment sector alone accounted for more than 47 per cent share in all textile goods exports from India to world. India exported garments worth of $10.96 billion to world during April-Nov 2016. In the last fiscal, India’s garment exports were to the tune of $16.9 billion.

The minister of state of textiles Ajay Tamta was also present at the event along with the other executive members and government officials from various ministries to showcase commitment towards strengthening India’s apparel export industry. (KD)

Scottish businesses, including textile firms, are set to benefit from ...

Incidences of online shopping and auction fraud in the UK rose by 37...