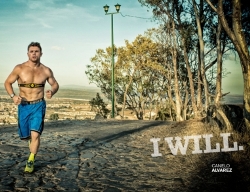 Under Armour, the leading sports performance apparel, footwear, and accessories brand, launched I WILL, its biggest ever global marketing campaign, at a press event in New York City. Featuring Under Armour's iconic I WILL trademark, the campaign brings to life the passion and determination that drives all athletes and Under Armour's commitment to engineering innovative products that provide real performance advantages.

At the event the brand unveiled the campaign's principal creative spot featuring Canelo Alvarez , boxing's welterweight World Champion, Sloane Stephens , the only teenager ranked in the top 20 in the WTA, Bryce Harper , the reigning National League Rookie of the Year, and Kemba Walker , who is currently leading his NBA team in points, assists and steals per game. The 60-second spot depicts the next generation of athletes in their authentic training environment outfitted in the brand's most technologically advanced products.

"Ten years ago Under Armour became a household name when the brand asked athletes everywhere to 'Protect this House.' The response in the iconic commercial, and throughout the years, has been the same: I WILL," said Plank. "Today, Under Armour inspires the next generation of athletes to unleash their inner resolve and our I WILL trademark confirms our promise to continuously redefine the future of performance through innovation that will help give athletes an edge."

The brand also showcased its Armour39 system– a first of its kind digital performance monitoring system designed to uncover the potential within all athletes that train to get better. Launching in March 2013, the system provides a single score WILLpower measurement that reflects an individual's overall effort during a workout session. The Armour39 system also tracks heart rate, calories burned, and intensity. Designed to seamlessly integrate into any workout, Armour39 allows athletes to uncover precise information about their training and athletic potential.

About Under Armour, Inc.

Under Armour is a leading developer, marketer, and distributor of branded performance apparel, footwear, and accessories. The Company's products are sold worldwide and worn by athletes at all levels, from youth to professional, on playing fields around the globe. The Under Armour global headquarters is in Baltimore, Maryland, with European headquarters in Amsterdam's Olympic Stadium, and additional offices in Denver, Hong Kong, Toronto, and Guangzhou, China.