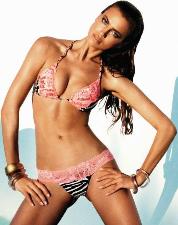 The season begins with Irina shooting Beach Bunny’s Spring Lady Lace and Bronze campaigns that are shot under the simmering sun by world renowned photographer Yu Tsai. Unveiling the brand’s most anticipated collections, Irina reveals styles that blend modernity with femininity for a look that is captivating. Irina sparkles and pops in Beach Bunny’s signature Lady Lace collection with styles set against the glistening blue water and a serene white backdrop. Things heat up with Bronze as Irina is transported to Carnival donning suits that boast desire while adorned in feathers and jewels.

Irina’s face will continue to enchant Beach Bunny fans this Cruise season as she shoots her own collection for the brand with a variety of bikinis and cover-ups that are bold in color and reflect the supermodel’s sexy and effortless style. The label, Irina Shayk for Beach Bunny is scheduled for a release this October, however followers can get a sneak peak of her designs on the runway during Mercedes Benz Fashion Week Swim this July.

This Russian beauty is no stranger to the California based swimwear brand. Irina first captured Beach Bunny’s heart when she graced their Cherry Pie suit in Sports Illustrated’s 2007 swimsuit issue and the stars finally aligned when she shot the brand’s 2010 campaign which also included her own designs.

“After seeing the success of our 2010 collaboration with Irina that gained worldwide attention, I knew it wouldn’t be long before we brought her back. She has a certain sex appeal that is magnetizing and with her timeless beauty and jet set attitude I can’t think of a better model to be our brand ambassador for 2013.” says Beach Bunny CEO Angela Chittenden.

Ms. Shayk started her career at the age of 19 modeling in Paris and in 2007 she replaced Ana Beatriz Barros as the face of Intimissimi and in the same year debuted in the annual Sports Illustrated Swimsuit Issue. Since then, she has appeared in every annual edition landing the coveted cover in 2011.

In addition to Intimissimi, Irina has shot campaigns for Guess, La Perla and Armani Exchange just to name a few. In 2011, she appeared on the cover of Ocean Drive’s July swim issue wearing none other than one of her designs for Beach Bunny. In addition, she has landed covers and spreads for countless magazines such as Cosmopolitan, Elle, Esquire, GQ, Harper’s Bazaar, Marie Claire, V, Vogue in addition to Glamour, where she was awarded "Best International Model.” In the personal arena, Irina can be seen arm in arm with Real Madrid soccer phenomenon Cristiano Ronaldo gaining followers wherever they go with their striking looks making them a true power couple.

Beach Bunny’s Lady Lace collection is now available with Bronze delivering in early April and Irina Shayk for Beach Bunny this October. All collections will be sold at Beach Bunny’s own retail stores in Los Angeles, Newport Beach, Scottsdale and South Beach in addition to major department stores and specialty boutiques worldwide.