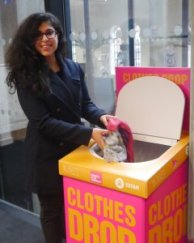 Now a partnership between Oxfam, Marks and Spencer and Glasgow Caledonian University is setting out to cut the huge amount of clothes which end up in landfill.

For the first time, a University partner has hosted a ‘shwopping’ event in conjunction with M&S and leading charity Oxfam.

Staff and students at GCU’s post-graduate London campus were the first to benefit from the University’s tie-up and ‘shwopped’ their unwanted items for M&S vouchers during a Valentine’s Day event.

Shwopping will now be rolled out to other workplaces across the country, including a second event to be held at GCU’s Glasgow campus in March, when more staff and students will be encouraged to get involved.

She said: “M&S is a company that is taking an active stance to reduce wastage and do something positive for the environment. Shwopping is a good way to capture people’s attention and get them involved in a practical way.”

GCU is the first organisation to bring shwopping to the workplace. This reflects the University’s commitment to engage with the wider community and encourage its business students to reflect upon the social impact of modern commerce.

Senior fashion lecturer Stephen Doyle, who is also one of GCU’s six Community Engagement Fellows, said he was delighted that M&S and Oxfam chose GCU to partner in the scheme.

He said: “Every year, one billion items of clothing are sent to landfill – which is a staggering 25% of all items sold in the UK. That isn’t sustainable and we want to help change the situation. This is why we have joined the shwopping campaign. All the clothes – including shoes – which people bring in will be given to Oxfam to be resold, reused or recycled.”

Stephen plans to further involve students in researching the initiative as it develops.

During a recent visit to GCU, where she delivered a masterclass to staff and students, Ms Daniels said: “Initiatives like this are important because the world is changing at a dramatic rate. Populations are getting larger, demands on resources are also increasing and currently we live as if we have unlimited resources. Businesses need to innovate to make sure that we ultimately have a sustainable future. Shwopping is an easy way for people to engage and make a contribution to that sustainable future."