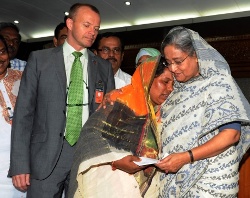 Prime Minister of Bangladesh Sheikh Hasina handed out compensation to the families of fire victims at Smart Fashion factory of 26 January 2013. The agreement was negotiated by the IndustriALL Regional Office, IndustriALL Bangladesh Council of trade unions (IBC) and brands Inditex and New Look.

According to the agreement, each family receives 1,049,000 BDT (13,300 USD), and one family with two minor children gets an additional 10 per cent to meet educational costs for minor children. The injured workers as well as those who lost their employment will also receive compensation. The workers earned an average monthly wage of 4,000 BDT (50 USD).

IndustriALL General Secretary Jyrki Raina explained at the ceremony that the agreement was reached and compensation was paid in less than a month after the tragedy at Smart Fashion. He pledged to pursue a similar compensation package with the brands and buyers that sourced from Tazreen Fashion, where another fire killed 112 workers on 26 November 2012.

Jyrki Raina said, “IndustriALL supports Prime Minister Sheikh Hasina and her government in the vision to expand the garment industry and create millions of new decent jobs. This vision is however threatened by major media attention in Europe and North America about problems related to fire safety, labour rights and very low wages. The good news is that the government is already working on these problem areas where urgent action is needed to improve the image of the industry:

The revision of the Labour Act 2006 to facilitate the registration of new local trade union organizations is in its final stage.

Minimum wages of 3,000 BDT (38 USD) per month need to be raised considerably, followed by annual revisions, as a number of neighbouring countries such as Indonesia (200 USD), China (200 USD) and Thailand (300 USD) have done in January.

Following a tripartite fire safety agreement signed by the Bangladeshi government, BGMEA and BKMEA and IBC on 15 January, a National Action Plan is planned to be finalized by 28 February. IndustriALL has convened major brands and buyers to its global head office in Geneva in March to discuss their input to the Plan.

IndustriALL is promoting a safety initiative which includes input from all stakeholders in the form of inspections, training and investment to upgrade hazardous installations.”

Earlier the same week, IndustriALL hosted a multi-stakeholder meeting in Dhaka which need for urgent progress on workers’ rights, minimum wages and fire safety in order to secure a sustainable future for the Bangadeshi garment industry and the creation of millions of new decent jobs.

UK shoppers struggle to be understood by chatbots: survey

Though chatbots are mainly used for customer service, more than half...