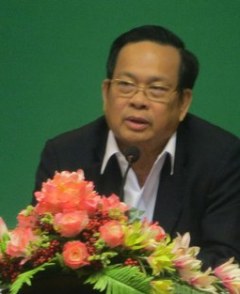 Mr. Ith Sam Heng (courtesy: RFA)
Wage rise for garment workers in Cambodia still seems to be a far cry as the representatives of the employers and workers of Cambodian garment units have failed to agree on the amount of wage rise.
At the wage negotiations being held under the guidance of Labor Advisory Council, the Garment Manufacturers Association in Cambodia (GMAC) offered to increase the minimum wage by US$11 from the current US$ 61 per month to US$ 72 per month.
However, the US$ 11 amount was not acceptable to representatives of trade unions, who said the sum was too meager and demanded that the minimum wage be raised to US$ 120 per month.
Speaking to media, Mr. Ith Sam Heng, Cambodian Minister of Social Affairs, said the Government is creating a working group comprising of representatives of workers’ unions, employers and Government officials.
The working group would coordinate between the employers and the trade unions to reach an amicable solution at the earliest, the Minister said.
The apparel industry is the third largest foreign exchange earner for Cambodia, and it fetched US$ 4.6 billion last year in foreign trade, showing a growth of eight percent year-on-year, according to figures from the Ministry of Commerce.
There are over 300 garment manufacturing units in Cambodia, which together employ around 335,000 workers, more than 90 percent of whom are female.
The US and the EU are the major importers of Cambodian clothing, followed by Canada, China, Japan and South Korea.