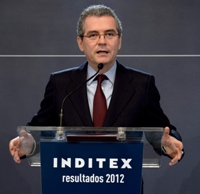 The Inditex Group’s net sales in FY2012 (1 February 2012 to 31 January 2013) rose by 16% from 2011, to 15.9 billion euros. Net income totaled 2.3billion euros, an increase of 22% from a year earlier. In constant currency terms, net sales increased by 14%, while like-for-like store sales raised by 6% in the same period.
Highlights of results
• The Group created 10,802 new jobs in 2012, bringing its workforce to120, 314 employees.
• Investment totaled 1.4 billion euros, notably on logistics.
• Net income totalled 2.3 billion euros, an increase of 22% from 2011.
• Inditex had 6,009 stores at the end of 2012, 482 more than a year earlier. New stores were opened in 64 markets, including the initial launches in five countries: Armenia, Bosnia-Herzegovina, Ecuador, Georgia and the Former Yugoslav Republic of Macedonia.
• The online store network continued to expand, reaching 23 markets, with noteworthy launches including Zara online stores in China in 2012 and Canada in 2013.
• Zara is set to launch its online store in the Russian Federation during the Autumn/Winter 2013 season.
• The Board of Directors will submit a proposal at the Annual General Meeting to increase the dividend by 22%, to a total of 2.20 euros pershare.
• Store sales in local currencies, adjusted for the calendar effect of an extra trading day in February 2012 due to the leap year, have increased by 12% from 1 February to 11 March 2013.
The Group created 10,802 new jobs during the year, as its workforce grew to 120,314 employees at the end of 2012. The company created jobs in all regions of the world in which it sells its products. Ordinary investments in the period exceeded 1.4 billion euros and were devoted to renovating and upgrading stores, rolling out new projects in the logistics division and modernising the eight distribution centres currently in operation, all of them in Spain.
Expanding the online sales platform
All of the company’s retailers continued to steadily expand online shopping into new markets, and as of the end of 2012 Inditex offered an online platform in 22 countries in Europe, the Americas and Asia. Expansion milestones included the September launch of Zara's online store in China and the arrival of Massimo Dutti and Zara Home online shops in the United States. Additional launches are scheduled for 2013. Zara's Canadian online store went live on 6 March. Zara Online is scheduled to land in the Russian Federation during the Autumn/Winter 2013 season.