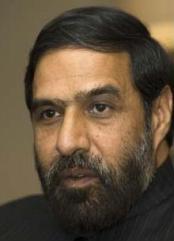 Mr. Anand Sharma
The annual supplement to India’s foreign trade policy (FTP), likely to be announced in the coming months, will have steps to boost exports, the Ministry of Commerce, has said.
Currently, the Ministry is holding consultations with various exporters and organizations to zero-in on steps needed to boost India’s exports, which have been negatively impacted by slowdown in Western economies.
Commerce and Industry Minister Anand Sharma has already held consultations with the Confederation of Indian Industry (CII), Federation of Indian Chambers of Commerce and Industry (FICCI), Federation of Indian Export Organizations (FIEO) and Apparel Export Promotion Council (AEPC).
At their meeting with the Minister, the representatives of AEPC and FIEO voiced concern over high prices of cotton yarn, rising transactions costs and the high rates of interest on export credit.
Speaking to reporters after the meeting, the Minister said that all the recommendations made by various export councils will be seriously looked into to find the best possible way forward.
He informed that Board of Trade, the highest advisory body on trade-related matters, will meet on March 22, after which the work for finalizing the FTP would be speeded up. However, the Government would wait for the final export figures of March, before announcing the policy, he added.