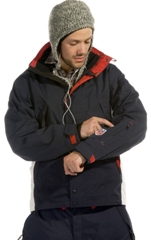 Peratech, the innovators in touch technology, is working with the London College of Fashion, University of the Arts London to develop wearable electronics that use Peratech’s award-winning QTC sensors.  This is a three and a half year PhD research project funded by an EPSRC ICASE award to explore the needs base and applications for wearable technology bringing together the expertise of industry and academe in a highly creative way.

“We are very excited to be involved in this project,” said David Lussey, Peratech’s CTO.  “Our QTC materials have already been used to provide switches in clothing for a number of years and so we know that it can withstand the rigors of being worn and washed.  This project combines technology, design and user needs to work out how this growing area of wearable technology can be developed.”

The core of QTC technology is that QTC materials change their resistance when a force is applied such as pressure.  Printing QTC inks on to textiles enables simple on/off switches to be created but, more interestingly, because the resistance changes proportionally to the amount of force applied, areas of the cloth can become touch sensitive or can be made to recognise pressure inputs.

“There are already glasses that provide computer displays,” explained David Lussey, “but they lack a simple way to input and interact with them.  With our technology, you could print a keyboard onto a sleeve or onto the back of a glove and link it via Bluetooth to the glasses.  Or even a rectangle of touch sensitive QTC material to act as a touchpad and respond to multi-touch gesture inputs of pinch, stretch, flick, etc. which are familiar from smartphones and tablets.”

Apart from being touch sensitive, QTC materials can also detect the presence of volatile organic compounds (VOCs).  Its printable QTC E-nose sensors work by the QTC material expanding in the presence of VOCs which changes the resistance of the QTC material giving very rapid response and recover times along with a high level of sensitivity.  Different formulations can be made according to the specific VOC to be detected so that low cost warning sensors and the associated electronics can be printed onto textiles to provide clothing that monitors the wearer for signs of illness, fatigue or exposure to dangerous chemicals.

“Apart from the obvious military applications of remote monitoring of personnel for stress and chemical attack, these sensors could be incorporated into clothing for everyday health monitoring as certain VOCs can be early indicators of health issues,” explained David Lussey.  “What is exciting is that the ability to print active and passive components is really taking off so that these combine with our QTC technology so that everything needed to print complete electronic circuits can be done at the same time directly onto flexible substrates such as films, papers and textiles.”

Founded in 1996, Peratech is a privately held company based in Richmond, North Yorkshire with 25 employees.  It commercialised its QTC technology at the beginning of 2006 and is currently working with a number of key technology clients who are implementing QTC sensing technology within their own products.  Its business is essentially the IP licensing model that has been proven to be rapidly scalable and highly profitable for the likes of ARM and many others.