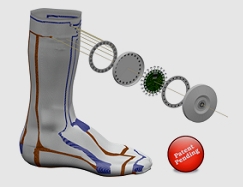 Electronic textiles or smart textiles could replace the wardrobe collection in future with hi-tech clothing which will provide sensor enabled solutions to the wearer.
Speaking to fibre2fashion, cofounder & CEO of Heapsylon LLC, Mr. Davide Vigano said, “We believe that in the near future each piece of clothing will become computers.”
“Smart fabrics will become a meaningful contributor by capturing the amount of data that body generates and communicating the data via networked devices such as smart phones to translate it into meaningful and actionable information for the user,” he adds.
Heapsylon has developed e-textile sensor enabled solutions for the human foot with smart socks. Another company which has proven its success in electronic textiles is Peratech.
“The next generation of connectivity will be distributed with computing, for example, Google Glasses providing the visual interface. The Human Machine Interfaces (HMI) of input will be built into the clothing with a textile tracker pad and switches,” says Mr. David Lussey, chief technology officer of Peratech.
“However, whilst active and passive components are straightforward to print, the missing piece of the jigsaw has been the switches and similar HMI such as touch pads as they typically need structures that cannot be screen printed and are vulnerable to water or dirt ingress getting between contacts,” he continues.
By contrast, Quantum Tunneling Composite (QTC) switches are solid state with no moving parts giving them a long operational life and robustness against contamination.  The QTC switches can be simple on/off or provide a variable response as their resistance changes according to the pressure applied.  QTC touch screens are similarly a solid state film of QTC providing x and y co-ordinate input along with z from the amount of pressure applied.
“Over half a million ski jackets have been sold that have QTC switches built in to control music players and they have proven robust in withstanding wear and washing,” Peratech spokesperson informs.