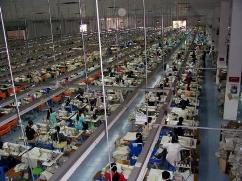 Urging the political parties to find out other ways to put across their demands rather than announcing strikes or shutdowns, Bangladesh’s readymade garment (RMG) producers said frequent strikes not only disturb their shipment schedules but are also hampering the country’s image.
The garment sector lost over US$ 500 million worth export orders to India due to bandhs called by political parties, a joint statement by Bangladesh Garment Manufacturers and Exporters Association (BGMEA) and Bangladesh Knitwear Manufacturers & Exporters Association (BKMEA) said.
Due to strikes, it becomes almost impossible for apparel producers in the country to obtain delivery of their shipments of imported raw materials from the ports, which ultimately impacts their production.
As such shutdowns are restraining exporters from timely executing their export commitments, at times, exporters even suffer cancellations and deferred payments.
Some times, exporters are forced to offer discounts when the buyers threaten to cancel orders due to their being not able to deliver goods on time, the statement said.
If the situation persists, it would impact growth and discourage investment, thus giving rise to a risk of high level redundancy in the industry, which is a direct source of employment for over three million people.
The two leading associations said the domestic clothing industry is already bearing the heat of global financial slump and gas and power crunch, and in the wake of such frequent shutdowns it would become impossible for the entrepreneurs to bear losses.