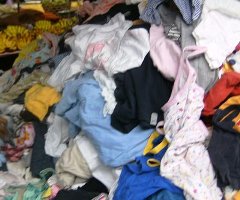 The Special Economic Zone (SEZ) Division, Department of Commerce, Ministry of Commerce & Industry, Government of India, has issued draft guidelines to regulate functioning of worn and used clothing units in SEZs.
Regarding the procedure to be followed for verification of documents prior to clearing the consignment in SEZ, the proposed guidelines state that each consignment of used clothing imported by a unit shall be accompanied with a certificate from the exporter/agency in which it was generated regarding disinfection and fumigation of the containers from an agency licensed in the state of origin of worn clothing with import documents.
In case of misdeclaration, action as per laws formulated by the Directorate General of Foreign Trade (DGFT) would also apply and action as per the Foreign Trade (Development & Regulation) Act, 1992, shall be taken by the competent authority.
“To ensure that used clothing units in SEZ fulfil their export obligations, the sale of domestic tariff area (DTA) by such units will be restricted to 50 percent of the free on board (FOB) value of the goods physically exported by the SEZ unit,” the draft guidelines said.
“Further, the sales to DTA of unmutilated clothing on account of export surplus or export rejects would not exceed 15 percent of the value of exports of the unit,” it added.
DTA refers to an area within India which is outside of the SEZs and export-oriented units (EOUs).
All imported consignments of used clothes would be subject to 100 percent scrutiny at the premises of the unit by SEZ/Customs authorities, the draft guidelines said.
On setting up of new used clothing units, the proposed guidelines state that the matter may be considered only after the mechanism being proposed for the existing units is implemented and reviewed at a future date for its efficacy.
The Ministry has asked stakeholders to submit their views and suggestion on the draft guidelines by April 18.