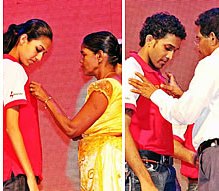 Top apparel exporter Brandix celebrated the completion of another year of high achievement by honouring 47 of the Group's best performing employees and supervisors of the large clusters at a spectacular multifaceted festival in Colombo on 6th April.

The event, titled 'Rasadiya Mangalya' (Mercury festival) saw employees in the associate, staff and supervisor categories from Brandix business units in Sri Lanka, India and Bangladesh rewarded for their performances and contributions to the Group's growth in 2012.

Each 'Employee of the Year' and 'Supervisor of the Year' received a handsome trophy of appreciation as well as a company-sponsored study tour to China, Vietnam, India or Bangladesh, and in Sri Lanka for those attached to the Group's overseas plants.

"The Brandix Group comprises of over 43,000 employees at 42 manufacturing plants in Sri Lanka, at a 1,000 acre industrial park in India and a large operation in Bangladesh," said Ishan Dantanarayana, the Group's Chief People Officer. "Clearly, people are our biggest asset, and motivating and rewarding performance is a key to success. Harnessing the collective team synergy to create a winning spirit is also critical to our business growth. That is why this event is one of the largest on the Brandix calendar."

Attended by over 5,000 people, the Brandix 'Rasadiya Mangalya' began with the Men's and Women's finals of the Brandix 'Rasadiya Kusalanaya' (Mercury Trophy) annual Volleyball Tournament for non-executive associates, the finals of the 'Rasadiya Gee Tharuwa' (Brandix Mercury Star) talent contest conducted across the Group over several months, and the presentation of awards to the winners of the Brandix 'Mech Challenge' -- a competition organised to enable the Group's mechanical and engineering associates to demonstrate their mechanical and technical skills.

Musical entertainment for the event was provided by the superstar duo Bhathiya and Santhush, as well as by the associates who won the Brandix Rasadiya Gee Tharuwa singing competition.

Colonel Sujith Jayasekara, Group Human Resources Manager of Brandix said the 41 Employees of the Year and six Supervisors of the Year were selected through a comprehensive process covering contributions to key business performance measures as well as additional engagements that bring value to associates as well as the business. "As in the case of last year, the inclusion of recipients from our Group's offshore factory locations in our industrial zone in India as well as in Bangladesh, was one of the features of the event. This year, we further strengthened the event by converting it to a festival," he said.

Sri Lanka's single largest apparel exporter, Brandix is credited with being the pioneer of the concept of 'total solutions' in Sri Lanka's apparel sector and is a global leader in eco-friendly manufacturing operations.