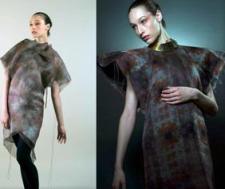 From corsets to caftans, we have seen dramatic changes in popular fashion during the 20th and early 21st centuries. Our descendants will surely wear clothes that are radically different from those we wear today. New research from Concordia University brings this future into focus by taking a closer look at the next quantum leap in textile design: computerized fabrics.

Joanna Berzowska, professor and chair of the Department of Design and Computation Arts at Concordia, has developed interactive electronic fabrics that harness power directly from the human body, store that energy, and then use it to change the garments’ visual properties. The animated garments made with these fabrics would change their colour and their shape in response to physical movement.

The major innovation of this research project is the ability to embed these electronic or computer functions within the fibre itself: rather than being attached to the textile, the necessary electronic components are woven into these new composite fibres. The fibres consist of multiple layers of polymers, which, when stretched and drawn out to a small diameter, begin to interact with each other. The fabric, produced in collaboration with the École Polytechnique de Montréal’s Maksim Skorobogatiy, represent a significant advance in the development of “smart textiles.”

Although it’s not yet possible to manufacture clothing with the new composite fibres, Berzowska worked with fashion designers to create conceptual prototypes that can help us visualize how such clothing might look and behave. Imagine a dress that changes shape and colour on its own, or a shirt that can capture the energy from human movement and use it to charge an iPhone.

“We won’t see such garments in stores for another 20 or 30 years, but the practical and creative possibilities are exciting,” says Berzowska. “Our goal is to create garments that can transform in complex and surprising ways — far beyond reversible jackets, or shirts that change colour in response to heat. That’s why the project is called Karma Chameleon.”

There would also be a performative aspect to wearing such garments, whose dramatic transformations may or may not be controlled by the wearer. This research raises interesting questions about human agency relative to fashion and computers. What would it mean to wear a piece of clothing with “a mind of its own,” that cannot be consciously controlled? How much intimate contact with computers do we really want?

Berzowska will raise these questions and present her findings at the Smart Fabrics 2013 conference this week in San Francisco. She has also written an article detailing her research for The Fashion Studies Handbook, forthcoming from Berg Publishers. An exhibition, to be held at the Phi Centre in the next year, will give the public an opportunity to learn about her research, and to enter the imaginative space produced by her futuristic fabrics and clothing.