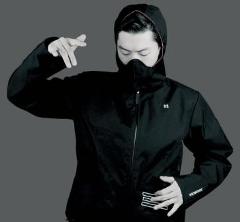 As the era of wearable clothing has begun to arrive with Jennifer Darmour's Pilates shirt and Heapsylon's Sensoria Fitness socks, the latest innovation in wearable electronics is Midi Controller Jacket developed by MACHINA.
The Midi Controller Jacket, which would allow musicians to control and create music through sensors and body movements, has four flexible sensors which can detect the user’s finger position, one accelerometer which can detect the person’s arm acceleration, a joystick and four push buttons. All of these sensors and buttons can be configured by the user, but they come with presets and initial configurations, too.
Speaking to fibre2fashion, co-founder of MACHINA, Ms. Linda Franco said, “The Machina Midi Controller Jacket is our first jacket, and we are developing this technology from the ground up. The jacket looks like a regular jacket, and it can be worn under any condition and the technology is programmed to be a Midi (Musical Instrument Digital Interface) controller, but can be adapted to any purpose.”
“We have included several sensors so the users can reprogram them. The sensors are invisible except for placeholders and this is to make sure that the jacket can be used as a regular jacket. We want integration to be complete, and that is why we are working so hard in making sure that, while the sensors are there, they do not affect the look and feel of the jacket,” she informs.
According to her, the accelerometers make using the jacket a different type of interface for composing music, adding kinetic capabilities. “This is just the initial functionality, but we are creating a hackstore that will allow users to upload their own presets and their own programs, so if the user wants to use it to control the iPod, to mix video, add extra sensors, or hack it to interact with a kinect, he or she will be able to do it,” she adds.
Talking about the inspiration for creating the Midi Controller Jacket, she says, “We believe that the way we interact with our clothing is changing and it should not only be a way of covering our body while helping us get laid. Our relationship with clothing should be much more and it should be an extension of our body, so we are using wearable technology to do that.”