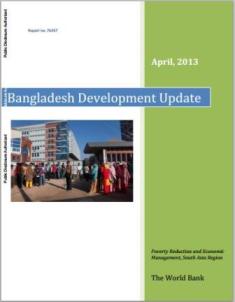 The readymade garment industry of Bangladesh is suffering from a severe image crisis in the international markets because of concerns about labor safety arising from recent fire incidents in two garment factories, which resulted in a combined casualty of 119 workers, says a report released by The World Bank.
Because of the worldwide concern over labor safety and standards, large RMG factories are starting to remove subcontracting from small factories that are non-compliant, states the report titled ‘Bangladesh Development Update – April, 2013’.
According to the report, international retail giants such as Walmart and Inditex are considering a zero-tolerance policy and cutting ties with suppliers who are non-compliant (or subcontract to non-compliant factories). In the short term, such an action might result in some companies not being able to meet shipment deadlines.
Furthermore, the recent fire incidents have led the US and EU to rethink the Generalized System of Preference (GSP) facilities provided to Bangladesh. The United States Trade Representative (USTR) has started the process of evaluating the GSP facility which might lead to a withdrawal, suspension or limitation of duty-free access.
Although, only 0.54 percent of Bangladesh exports to the US in 2011 were under the GSP scheme, cancellation of the facility might send strong adverse signals about production conditions in Bangladesh, and might lead buyers to reconsider Bangladesh as a major source of apparel, the report warns.
On the other hand, the report says, Europe, the largest export market of Bangladesh, is also contemplating actions against Bangladesh to ensure full compliance in labor safety.
EU has revised its GSP scheme which will be in effect from January 1, 2014. Under the revised scheme, although Bangladesh is assessed to benefit most under the “everything but arms” (EBA) category, the textile and apparel exports may suffer heavily, predicts the World Bank.
The report cites unprecedented political complexity in Bangladesh as an immediate hindrance to faster economic growth. It states, “Hartals create an unfriendly and unstable environment for investment by disrupting the production and trading activities and increasing the cost of doing business.”