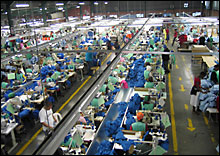 The two-tier wage system that the Department of Labor and Employment (DOLE) is pushing for is acceptable to garment exporters in the country, a statement from the Philippine Exporters Confederation, Inc. quoted Confederation of Garment Exporters of the Philippines (CONGEP) Executive Director Marites Agoncillo as saying.
The two-tier system proposes a fixed floor wage or entry-level wage for low-skilled workers or new entrants and a flexible wage for other workers depending on their productivity and performance of the industry or enterprise, negotiable between the employer and the workers.
CONGEP is pondering over various possible wage flexibilities with DOLE, Mr. Agoncillo said and added that if the proposed wage system is implemented, it would create around 3,000 new job opportunities in the sector.
Labour charges constitute an important component in production cost for garments, and hence is a major factor for determining whether to make further investments in the sector or not. However, other factors like high cost of power are also a cause of concern for garment exporters, he said.
Besides wage agreements, the industry is also trying hard for passage of the Save Our Industries Act to boost its export performance.
Once passed, the bill would earn duty-free access for Philippine garments made from American fabrics to the US.
After being first presented in the US Congress in 2009, the bill has been set aside several times due to reservations of the US Senators. However, it is now once again proposed to be reintroduced this year.
According to the National Statistics Office (NSO) data, the Philippines exported around US$ 1.573 billion worth of garments last year, around 17 percent less than 2011.
Likewise, its textile exports also plummeted by 7.26 percent from that recorded in 2011 to US$ 170.362 million in 2012.
By end of February 2013, garment exports from Philippines dipped to US$ 244.522 million, a year-on-year fall of 22.96 percent, while textile exports dipped by 4.01 percent to US$ 27.406 million.