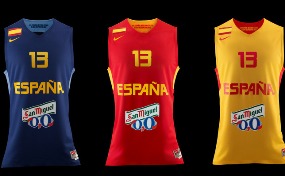 The kits account for Spain’s climate, and showcase the country’s artisitic spirit through a bold sunrise graphic. The font used for the players' names and numbers is based on the Ñ, a letter strongly identified with the Spanish alphabet.

The jerseys feature a V-neck collar and a small Spanish flag on the front; on the back is a striking graphic of the sun and its rays. Inside the neck is the inspiring phrase: “Ser Espanol no es una excusa, es una responsabilidad,” which translates as: “Being Spanish is not an excuse, it's a responsibility."

The kits are made from recycled polyester, emphasizing Nike’s commitment to sustainability. The shirt and shorts of each kit are made from up to 22 recycled plastic water bottles.

As Nike’s lightest basketball kit ever, the  jersey features Nike Aerographics, an engineered fabric that provides a cooling solution allowing greater flexibility without added seams. Overall, the kit boasts greater breathability and cooling than ever before by featuring mesh areas, hem vents, modified armholes and panels of laser-cut holes on each side of the jersey.

The fabric also integrates Nike Dri-Fit technology, which regulates players’ temperatures on the court by drawing away sweat from the body to keep athletes cool, dry and focused on their game.

The new kits will debut on-court later this year — the women's team in June and men's in September.