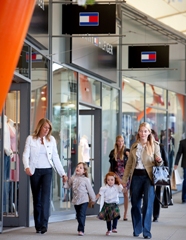 McArthurGlen’s Ashford Designer Outlet will welcome American fashion and lifestyle giant Abercrombie & Fitch on 9 May, as they make their designer outlet debut in the European market.

With ranges for men, women and children, including casualwear, denim and beach essentials, the brand is universally loved by style-conscious shoppers seeking the signature look.

The new Abercrombie & Fitch store will open its doors on 9 May and will sit alongside Ashford’s extensive range of sought-after fashion and lifestyle brands, including Calvin Klein, Superdry, Lacoste, Fred Perry, Ted Baker, Nike, Adidas and Guess.

McArthurGlen’s Ashford Designer Outlet is a five-minute walk from Ashford International train station, offering a high-speed train link from London, taking just 37 minutes, as well as connections to France and Germany, making it easily accessible for both domestic and international shoppers.

The centre, which is one of seven McArthurGlen Designer Outlets in the UK, offers 80 designer and fashion brands with year-round savings of up to 60% and is a must-visit shopping destination for shoppers looking to keep up with the latest fashion trends. New openings in 2012 included Reiss, Crabtree & Evelyn, Links of London and Molton Brown.