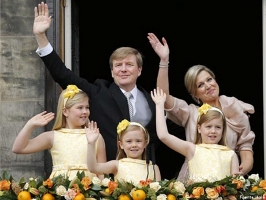 courtesy: PiliCarrera.com
Princesses Amalia, Alexia and Ariane, the three daughters of the king of Netherlands Willem-Alexander Claus George Ferdinand, appeared all dressed up in cute Pili Carrera outfits at their father’s recently solemnised Coronation Ceremony.
The beautiful Dutch princesses, who are 9, 7 and 6 years of age respectively, wore identical ensembles from the popular Galician kidswear label’s Primavera-Summer 2013 collection.
Paired with a matching flower headband, the tiny royal fashionistas’ sleeveless jacquard frocks were made from a mix of brocade, linen, silk and cotton, imported from Italy.
The cutesy identical knee-length dresses, tied at the waist, also feature yellow and white floral prints, boat neckline and cross back glass buttons.
Founded in 1963 and headquartered in the province of Pontevedra, Pili Carrera operates with more than 200 employees.
Considered as the youngest monarch in Europe, the Prince of Orange, Willem Alexander, 46, is the first male ruler to occupy the Dutch throne in the last 120 years.