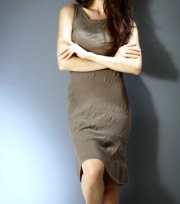 Scientists in UK have come up with a technique to detect fake clothing with the use of terahertz radiation.
Researchers from the National Physical Laboratory (NPL) in UK recently published an article in the magazine Applied Optics that demonstrates how a technique called terahertz time-domain spectroscopy can be used to detect fake clothing and combat textile counterfeiting.
According to a statement on the NPL website, the technique would help the fashion industry in UK as it would spot counterfeit clothing that costs designer brands and retailers an estimated £3.5 billion every year.
The technique requires the generation of a beam of terahertz radiation (a band of electromagnetic radiation that falls between microwaves and infrared light) under which a sample of fabric has to be placed.
The beam would help detecting the properties of the terahertz waves after the fabric is passed through it.
The research examined fabrics made from wool, cotton, and linen as well as silk and mixed fibers, all of which demonstrated distinct terahertz transmission properties.
According to the statement, the technique could clearly distinguish between fabrics that looked and felt similar but had different compositions, like the difference between plain wool and the more expensive merino wool, as well as between natural and synthetic silk.
The results of the research demonstrated the potential of terahertz spectroscopy to identify different types of textile and prevent fraud.
John Molloy, one of the researchers of the project at NPL, said, “Counterfeit clothes can look and feel almost exactly like the real thing and so customs officials need technological assistance to spot them.”
“Terahertz spectroscopy is a fast, safe and reliable test that could help safeguard one of the UK's most valuable industries,” he added.
The next stage of the result requires testing batches of the same type of fabric from the same manufacturers as well as creating a database of terahertz transmission properties of many different fabrics.
The research was conducted in collaboration with the Institute of Monitoring of Climatic and Ecological Systems in Russia.