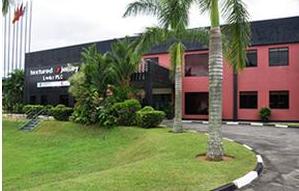 During the quarter under review, the company also declared a Rs.0.58 per share final dividend for the last financial year ended 31st March 2013, bringing the total annual dividends to Rs.1.24 per share, a very generous 80% pay-out of the FY2012/13 full year profit.

According to Mr. Lam, the positive impact of the higher sales volumes and improved gross margins flowed down to the operating profit level, resulting in an operating profit margin of 8.0% for 1Q FY2013/14 compared to 6.3% during the same period of the previous year. TJL also reported a strong operating profit of Rs.228mn for the quarter under review, representing a 39% year-on-year growth.

Mentioning the company's financial position, Mr.Lam stated that the company retained a healthy cash balance of Rs.1.7bn as at 30th June 2013, and that it had completely settled both short- and long-term borrowings at the end of the period. As per his statement, this lowered the finance expense to an almost non-material level for 1Q FY2013/14, which allowed the company to record a net finance income of Rs.23.7mn for the quarter, up 200% year-on-year.

Summing up the quarterly result, Mr. Lam mentioned that the higher operating profits and the strong cash position allowed TJL to record a net profit of Rs.240mn for 1Q FY2013/14, 40% higher than the corresponding quarter of last year.

Further, according to Mr. Lam, the continued interest from TJL's main customers - Victoria's Secret, Marks & Spencer, Intimissimi and Decathlon - combined with the growth potential of emerging customers, makes TJL's management confident of strong demand for the next period as well.

On strategic initiatives, Mr.Lam stated that the construction of TJL's multi-fuel boiler plant was progressing according to plan. According to Mr. Lam, the plant is expected to reduce TJL's energy cost substantially when commissioned.

Commenting on the expansion strategy, the statement mentioned that TJL had commenced adding capacity through subcontracting, while building long term relationships. This process, while addressing immediate capacity constraints, is expected to enable TJL to further evaluate long term options.

Mr.Lam concluded his statement by mentioning that given all these factors and a strong order book, TJL's management remained confident that the company would continue to enhance shareholder value in the coming quarter as well.