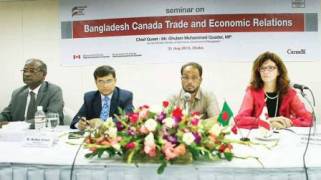 courtesy: Dhaka Tribune
Bangladesh’s garment sector would not be affected by the amendments being made by the Canadian Government in its General Preferential Tariff (GPT) rules and Rules of Origin.
Heather Cruden, Canadian High Commissioner in Bangladesh, said, as being a least developed country (LDC), Bangladesh would still qualify for duty-free access for its readymade garment (RMG) exports to Canadian market, reports Financial Express.
The High Commissioner was speaking at a seminar on 'Bangladesh Canada Trade and Economic Relations' jointly organised by the Bangladesh Foreign Trade Institute (BFTI) and the Bangladesh Garment Manufacturers and Exporters Association (BGMEA) in Dhaka.
In its effort to modernise GPT, the Canadian Government has decided to graduate 72 higher-income and trade competitive countries, as of January 01, 2015, which would be no more eligible for GPT facilities.
This might affect Bangladesh as its imports lot of raw material for its garments from several countries that would be among the list of 72 graduating countries, including India, China, and Thailand.
The envoy said Canada would initiate measures to see that LDCs like Bangladesh do not lose on any of the benefits due to change in GPT, meaning that Rules of Origin requirements would also be altered to allow RMG manufacturers to enjoy duty-free access to Canada, even for goods made from textile inputs procured from existing but graduating GPT countries like India and China.
Ms. Cruden said Bangladeshi entrepreneurs need to develop new and better products and explore new and existing markets, while the Canadian Government shall extend policy and institutional support to this end.