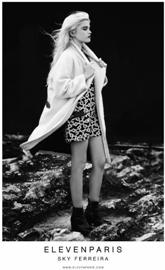 Each season, Parisian label ELEVENPARIS exerts its rock ‘n’ roll personality through a series of edgy campaign images, featuring a double act of the coolest names in the industry.

Having always personified a fashionable, relaxed style by mixing musical genres and influences, the king of cool Lenny Kravitz has sold over 38 million albums across the globe and is now considered one of the world’s greatest rock stars.

Sky Ferreira is a versatile artist who, at only 21 years old, is known for her talent as a composer-writer, model and actress. With her baby face, peroxide hair and sombre gaze, she symbolizes the re-birth of grunge attitude.

Having photographed the likes of Daft Punk and other celebrities, French photographer Mathieu Cesar was called upon by ELEVENPARIS to capture the essence of AW13 in his all black and white photography.

When asked why he works solely in black and white, he answered; “Simply because it’s more beautiful. And because it’s better for seeing the emotion on people’s faces”. Together with Kravitz and Ferreira, Cesar perfectly illustrates the ethos behind the ELEVENPARIS AW13/14 campaign.

The ELEVENPARIS design studio is constantly travelling around the world drawing its inspiration from the history, culture, youth and architecture of urban capitals. This season, eclectic Warsaw was the starting point for the AW13/14 collection.

Like the capital, which is marked by its painful past, having been practically destroyed by war, the campaign took anarchic, raw ruins for its backdrop. The two protagonists look paradoxically lost and determined in this desolate landscape. ELEVENPARIS affirms its subtly dark but optimistic fashion vision from this vast and constantly evolving work site.

From leather to brocade, sequins and velvet, an abundance of textures and prints form the basis of the latest collections, injecting the spirit of 90’s grunge and the return of punk to the fashion scene.