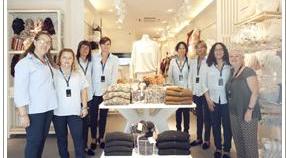 In opening a store serviced by persons with severe mental illness in Palafolls (Barcelona), in collaboration with NGO Fundació El Molí d’en Puigvert, fashion chain Oysho has joined the Inditex Group's ‘for&from’ workforce integration program. This is the third store opened under the program in this Catalan town, where Massimo Dutti and Bershka also operate ‘for&from’ stores, and it is the seventh such store in all of Spain.

This initiative is part of the workforce integration program spearheaded by Inditex and targeted at persons with some form of physical or intellectual deficiency. The ‘for&from’ program dates back to 2002 when Massimo Dutti opened the first such concept store.

With this new opening, the ‘for&from’ program now boasts a network of seven stores: three in Palafolls, Barcelona (Oysho, Massimo Dutti and Bershka); two in Allariz, Ourense (Massimo Dutti and Tempe, the latter selling accessories and footwear from all of the Inditex Group’s formats); one Tempe store in Elche, Alicante; and one Stradivarius store in Manresa (Barcelona).

The Oysho ‘for&from’ store, located at 7, Carrer Major in Palafolls, sells prior-season items at discounted prices. The store’s staff is made up of eight people, six of which have been diagnosed with severe mental illness. These workers have received specific training from Fundació El Molí d’en Puigvert, an NGO specialised in social and workplace rehabilitation programs for persons with severe mental illness based in the town of Maresme, and from Oysho’s store specialists.

The single-storey Oysho ‘for&from’ establishment has a sales area of 80 square metres. Its layout was custom-designed to maximize accessibility and eliminate barriers, while preserving the image projected by Oysho throughout its more than 500 stores worldwide.

Inditex first contacted Fundació Molí d’en Puigvert back in 2001 with the aim of exploring new ways to bring vulnerable groups and persons with severely limited job prospects into society and the workplace. As a result, a Massimo Dutti store employing persons with severe mental deficiencies was opened in Palafolls in 2002.

Bershka joined this Fundació Molí program in 2008, opening its debut ‘for&from’ store in this same town. The program’s successes in terms of the employees’ integration into society and the workforce are tangible: the health of the Massimo Dutti and Bershka Palafolls employees has improved, they are taking less medicine and they are spending less time as hospital in-patients.