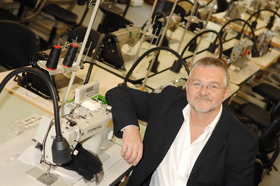 Prof. Doug Miller
A professor from Northumbria University, Newcastle, is calling for a new minimum wage to be adopted for clothing factory workers in Bangladesh.

Doug Miller, emeritus professor of Worker Rights in Fashion at Northumbria, has worked with the Centre for Policy Dialogue (CPD) – a Bangladeshi think-tank – and Dutch-based consultancy Berenschot to calculate a living wage that takes into account the food and living costs faced by workers.

The research examines the upper poverty line, family size, a realistic picture of everyday expenses, purchasing power and a model diet that includes energy and nutritional values. It concludes that there is a huge gap between the monthly income factory workers need in order to live and the wage they are currently paid. The team therefore recommends that the Bangladeshi minimum wage needs to be adjusted.

The researchers have devised a formula to calculate the minimum living wage of at least Tk 8,200 for entry level workers who are currently paid Tk 3,000 per month. The wage increase would help workers meet the basic needs for themselves and their families while providing some discretionary income.

The research team’s independent calculations have been published in a paper, entitled ‘Estimating a Living Minimum Wage for the Ready Made Garment Sector in Bangladesh’, which they have submitted to the Bangladeshi Minimum Wage Board .

The Board is expected to announce their revised minimum wage in the coming days.

The global garment sector has long been viewed as a ‘sweatshop’ industry reliant on low-paid workers in developing countries, some of whom continue to work in dangerous conditions. Some 3.5 million workers, 80% of whom are young women, work in the ready-made garment sector in Bangladesh and are paid some of the lowest wages in the global industry.

If the board were to declare the minimum living wage figure calculated by the researchers it would transform lives, not just of those workers in the sector, but of thousands of Bangladeshis whose lives depend upon their wages.

Prof Miller said: “Establishing a new minimum living wage is one thing – creating the conditions under which this might be paid is another. The majority of brands and retailers do have living wage commitments in their corporate codes of conduct but, because we are dealing with a multi-buyer outsourced supply chain, the least they could achieve would be to ring fence a living wage labor cost in their commercial transactions. This is the subject of a separate piece of action research which is underway.”

Claudia Schlangen, of Berenschot, added: “It would moreover be helpful if tripartite wage negotiations were to be held on an annual basis, so that wages are gradually corrected for inflation. This would make wage increases more predictable for factory owners and buyers. Tripartite negotiations in Bangladesh are not easy, given the power differences between the different actors, yet it will ultimately be the only sustainable solution.”

US suspends tariffs on UK fashion-textile exports in trade dispute

The United States and the United Kingdom have released a joint...

German retail sales fall in Jan due to lockdown

Retail sales in Germany fell more than expected in January this year...

âIn terms of fabric, the fastest growing category for us is a blend of...