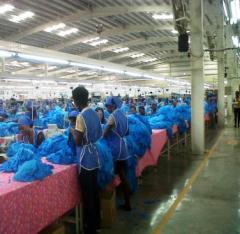 courtesy: CTMO-HOPE
Haiti, the Caribbean country that shares the island of Hispaniola, in the Greater Antillean archipelago, with the Dominican Republic, is expecting to achieve US$ 1.2 billion in garment exports this year, according to the Presidential Commission implementing the Hope II Legislation (CTMO-HOPE) Secretariat.
The report ‘Outlook 2014: Made in Haiti-Growth and Expansion’, prepared by CTMO-HOPE Secretariat, says Haiti produced $800 million worth of garments in 2013, including 20 million dozen T-shirts and 1.5 million dozen jeans.
Last year, Haiti exported 1 million dozen cotton trousers (uniforms and khakis), 230,000 woolen men’s suits, 1.8 million dozen MMF innerwear and 9 million dozen cotton innerwear to the US, its main market. The buyers included Levy’s, Walmart, Target, Kohl’s, Jos A. Bank, Hanes, Gildan, Fruit-of-the-Loom, Hanes, Gap, and VF Corp.
Building on the last year’s performance, Haiti’s apparel sector is consolidating its position as a premier sourcing location for the manufacture of casual wear, for exporting to the US, Canada, Europe, South America and Asia.
In 2014, the goal is to secure orders creating 35,000 new jobs and attain $1.2 billion in value of exports with increased shipment of synthetic knit garments under HOPE-HELP, states the report.
Haiti has comparative advantage, as it is centrally located within easy reach of major markets like the US, Canada and the EU.
It also benefits from “No duty and favorable rules of origin for Made in Haiti apparel entering North America and Europe.”
Through the HOPE (2006) HOPE II (2008) and HELP (2010) Acts, the US Congress grants unique trade preferences to apparel cut and sewn in Haiti, using ports in Haiti and in the Dominican Republic.
On the other hand, Europe provides preferential access to Haitian products under the World Trade Organisation (WTO) norms, Generalised System of Preferences (GSP) and the Economic Partnership Agreement (EPA).
As per the December 2013 WTO Bali conventions, Haiti, being a least developed country (LDC), can seek bilateral preferences from both developed and developing countries such as Brazil, Mexico and Chile.
Further, the HELP Act directs USTR to accompany Haiti in bilateral trade negotiations with countries where the US maintains trade relations. The HOPE-HELP preferences are eligible for extension beyond 2020.