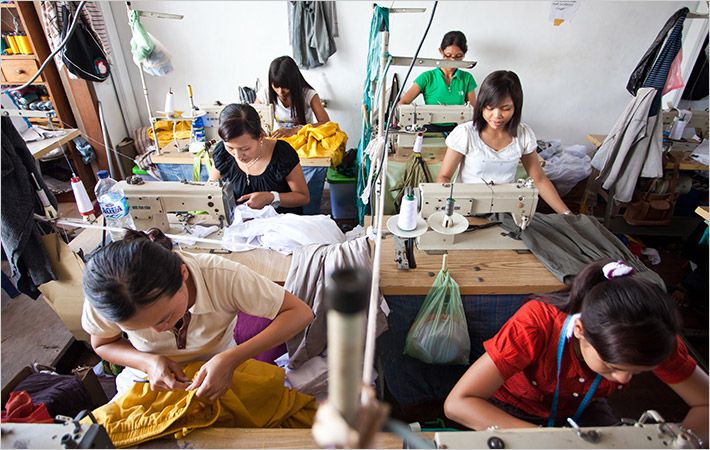 The issue of minimum wages in Myanmar is no longer a domestic subject. Two international labour watchdogs simultaneously have released statements, pledging support for the Myanmar government’s proposed minimum wage of 3,600 kyat ($3) per day.
The Ethical Trading Initiative (ETI) and the Fair Labor Association (FLA) claim to have the backing of 17 major international manufacturers, including sportswear giant Adidas, clothing retailer Gap Inc, as well as Tesco, H&M and Patagonia.
In separate letters to Myanmar’s labour ministry, the ETI and FLA urged the government to resist a request for an exemption to the minimum wage from the country’s garment manufacturers.
“FLA affiliates commit to a standard of fair compensation that is incompatible with the proposal to exempt garment workers from the country-wide minimum wage,” said Jason Judd, FLA’s vice president of programmes.
In its statement, ETI said, “ETI and its members support international calls for Myanmar’s new minimum wage to be applied countrywide. We have articulated this stance in a letter to the Myanmar government, urging it to resist the request for an exemption from the country’s garment manufacturers.”
It added: “We wish to counter the claims of Myanmar’s garment manufacturers and employers associations that higher wages will dissuade foreign investors. A minimum wage that has been negotiated by all parties will attract rather than deter international companies from buying garments from Myanmar, particularly companies such as ETI members that have committed to upholding international labour rights standards in their global supply chains.”
Earlier this month, the All-Myanmar Network of Trade Unions rejected the offer of a 3,600-kyat daily wage and called on workers to be prepared to take to the streets in protest. A day earlier the Confederation of Trade Unions of Myanmar (CTUM) had announced its support for the proposal. Both represent thousands of factory workers in the burgeoning garment sector, which is mostly built in the outlying areas of Rangoon.
Meanwhile, the Myanmar Garment Manufacturers Association (MGMA), which represents factory owners, threatened to close down factories if the proposed 3,600 kyat per day minimum wage is approved by the government.
The garment factory owners say the proposal of the National Committee for Minimum Wage (NCMW) is “unaffordable” and will put some 200,000 factory jobs at risk.
In late June, around 30 Chinese and 60 South Korean-operated factories said they would shut down operations if the minimum wage of 3,600 kyat per day proposed by the government-led NCMW for minimum wage is approved.
More Apparel/Garments News - Myanmar...